Between 2017-2019, and with the support of the Ford Foundation, Global Americans convened a High-Level Working Group on Inter-American Relations, comprising former policymakers, business leaders, and scholars, to discuss bipartisan and cross-regional ways that the current U.S. administration can build and improve upon the achievements of the past two decades of inter-American relations. With a first round of five papers published in April 2018, the Working Group has released an additional three papers in November 2019. 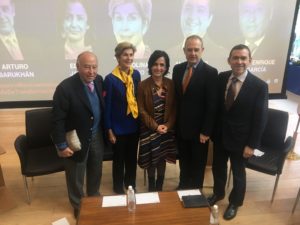 The group is co-chaired by: 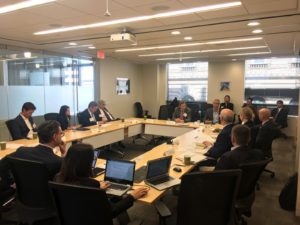 Representing civil society, academia, and the policymaking and business communities in the U.S., Latin America and the Caribbean, the working group has met in Washington, DC, Colombia and Mexico to produce a series of consensus documents on the topics of:

The Caribbean’s Extreme Vulnerability to Climate Change: A Comprehensive Strategy to Build a Resilient, Secure and Prosperous Western Hemisphere

Responding to Growing Influences from Outside the Hemisphere: Setting a New Inter-American Agenda

More Jobs in the Western Hemisphere: A Winning Trade and Investment Strategy in the Context of NAFTA Negotiations

An Improved Strategy to Fight Drug Trafficking, Organized Crime and Corruption in the Hemisphere

How Educational Exchange and Collaboration Supports the U.S. Economy and National Interests

April 18-20, 2018, Washington, D.C. – Release and presentation of papers, including a public event on Capitol Hill

May and June, 2018, Houston & Dallas, Texas – Presentations to business communities and universities, and the World Affairs Councils of Houston and Dallas

February 4, 2019, Washington, D.C. – Working group reception at the Embassy of Colombia in Washington

February 5, 2019, Washington, D.C. –  Second discussion round for the second round of papers

November 4, 2019, Washington, D.C. – Release and presentation of second round of papers