Global Americans is proud to launch a new research initiative evaluating the future of U.S.-Ecuador relations. This independent project examines how both the United States and Ecuador might benefit from deeper engagement; a dedication to common principles of democracy, human rights, and the rule of law; and an emphasis on shared prosperity. At the end of this project, Global Americans will offer specific recommendations on how to strengthen the U.S.-Ecuador relationship to the benefit of the people of both countries.

Read our latest report, “Ecuador and the U.S.-China Rivalry: Between Two Great Powers.”

This special report is a collaboration between Global Americans and Prófitas, Ecuador’s leading political risk consultancy firm. Founded in 2004, Prófitas gathers a specialized team of entrepreneurs and social scientists, whose goal is to help companies understand and manage the economic, political, and social environment of business.

Ecuador and the US-China Relationship


Recent developments in both the U.S. and Ecuador—including the elections of new presidents in both countries—offer a unique opportunity to discuss how the two countries might combat the COVID-19 pandemic, spark economic growth, and pursue other priorities. 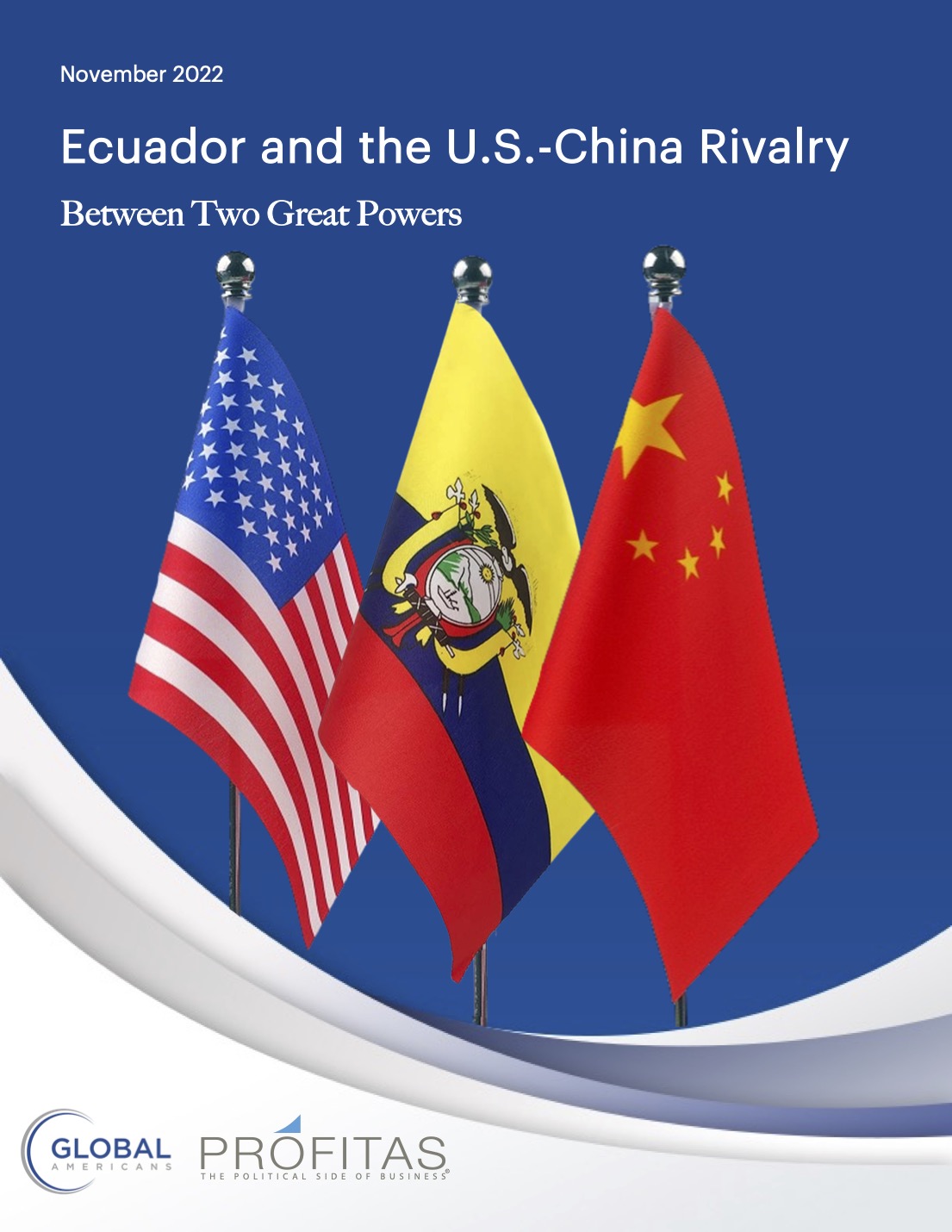 Ecuador and the U.S.-China Rivalry: Between Two Great Powers

In the coming decades, Ecuador’s political stability and economic dynamism will largely depend on the country’s ability to navigate between two great powers: The United States and China. If Ecuador is forced to choose between them, it will face political headwinds and economic stagnation. We present an alternative course—one in which Ecuador works pragmatically with both countries, making the most of each partner’s comparative advantages.

This special report is a collaboration between Global Americans and Prófitas, Ecuador’s leading political risk consultancy firm. Founded in 2004, Prófitas gathers a specialized team of entrepreneurs and social scientists, whose goal is to help companies understand and manage the economic, political, and social environment of business. 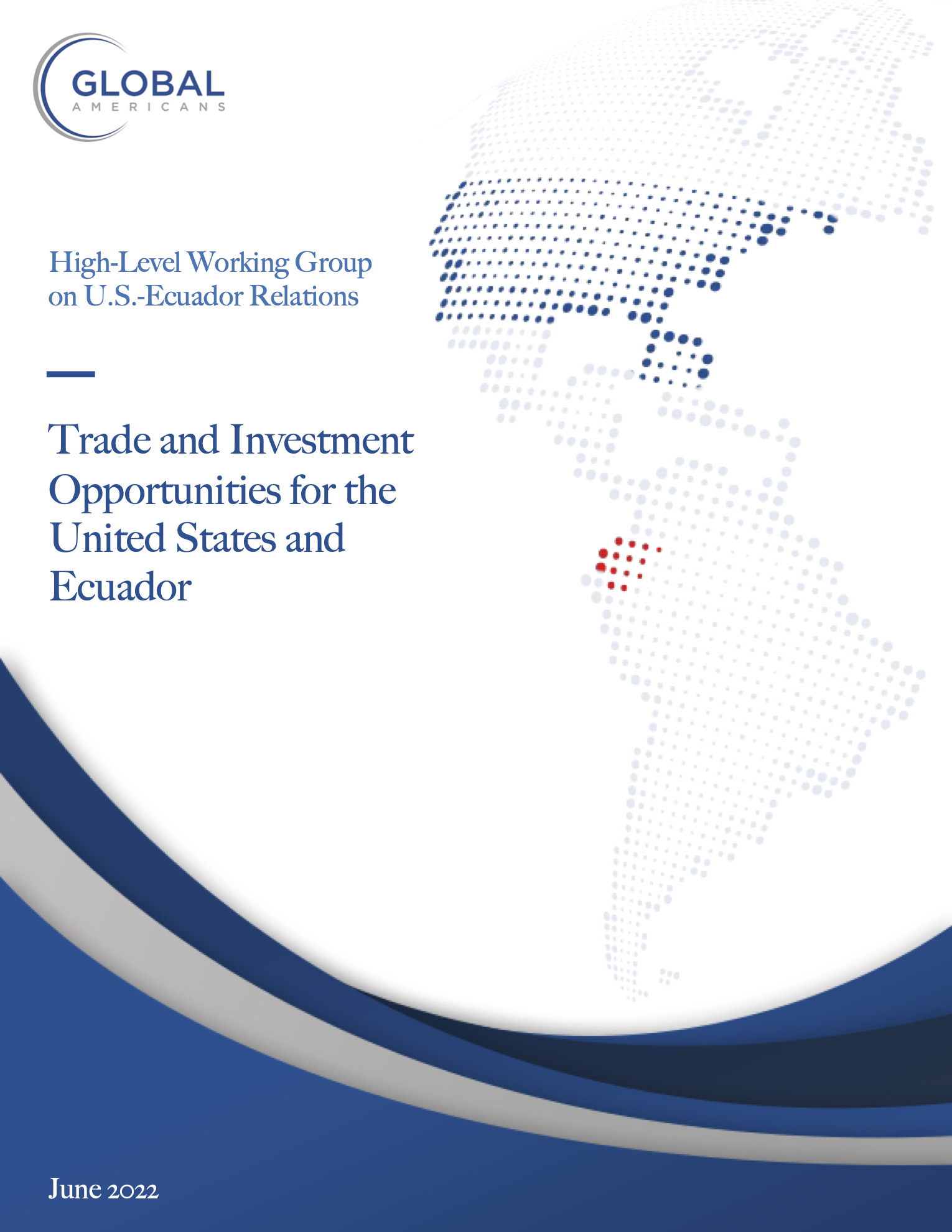 Trade and Investment Opportunities for the United States and Ecuador

Ecuador is unique among the Pacific-facing countries of Latin America, standing out as the only West Coast nation in the region to lack a trade accord with the United States. Despite its dollarized economy, abundant natural resources, and pro-market policies, Ecuador is among the countries with the lowest flows of foreign direct investment in the hemisphere.
This report explains why Ecuador has historically fallen behind in trade and investment. It then evaluates the opportunities for greater commercial integration between the U.S. and Ecuador given today’s political and regulatory climate. 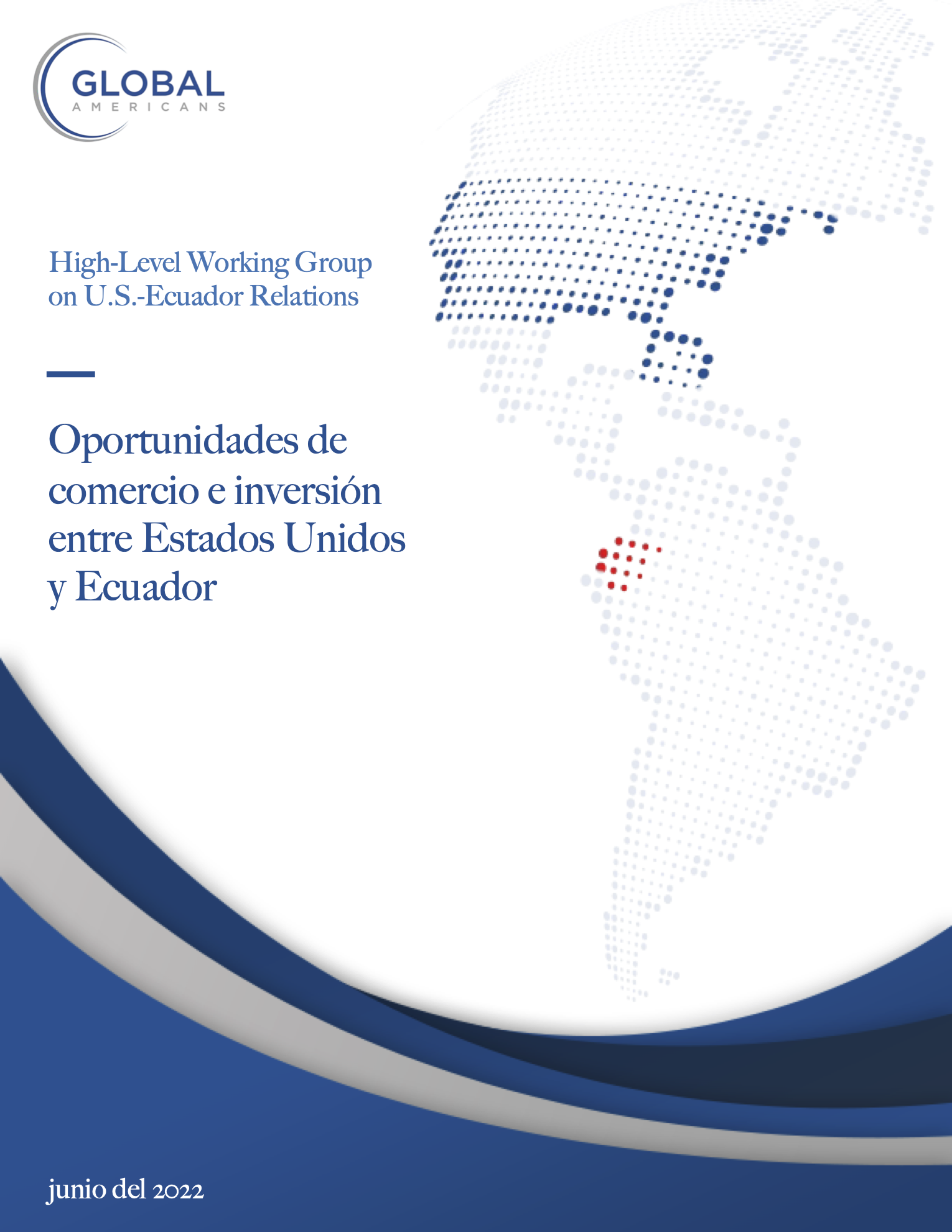 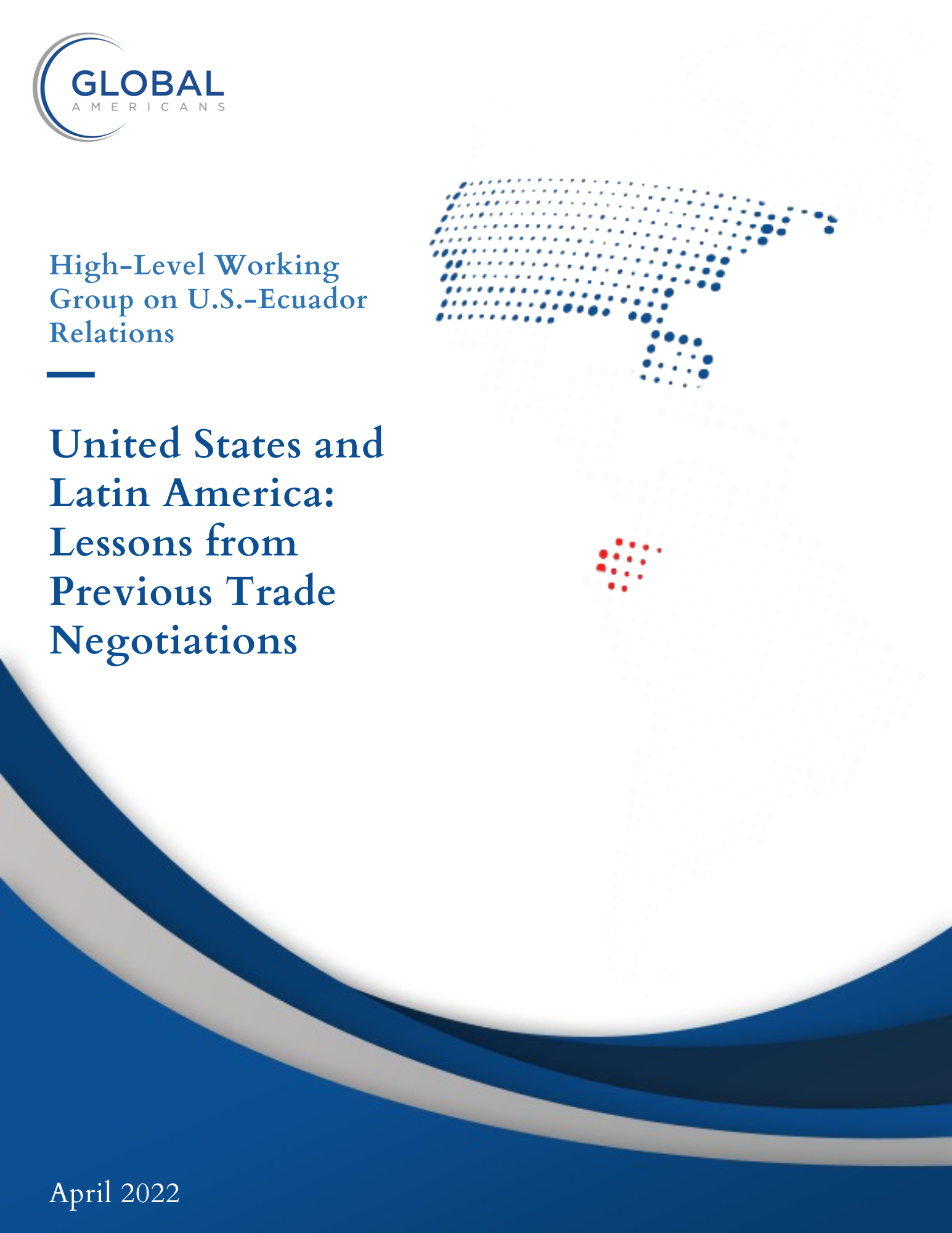 As Ecuador and the United States deepen their engagement on trade and investment, stakeholders in both countries can learn from previous trade accords that the U.S. has struck with its Latin American neighbors. This report takes a close look at the United States’ bilateral deals with Chile, Peru, and Colombia, as well as the U.S.-Mexico-Canada Agreement (USMCA) and its precursor, the North American Free Trade Agreement (NAFTA). 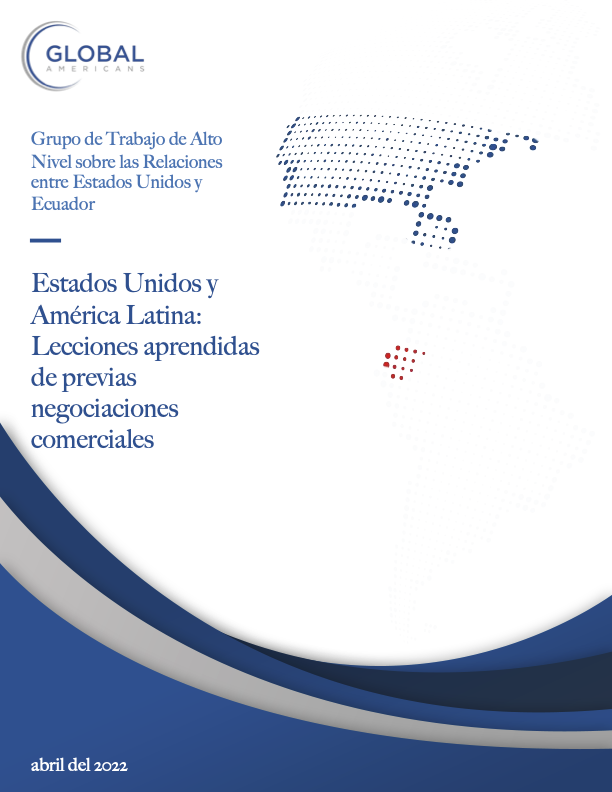 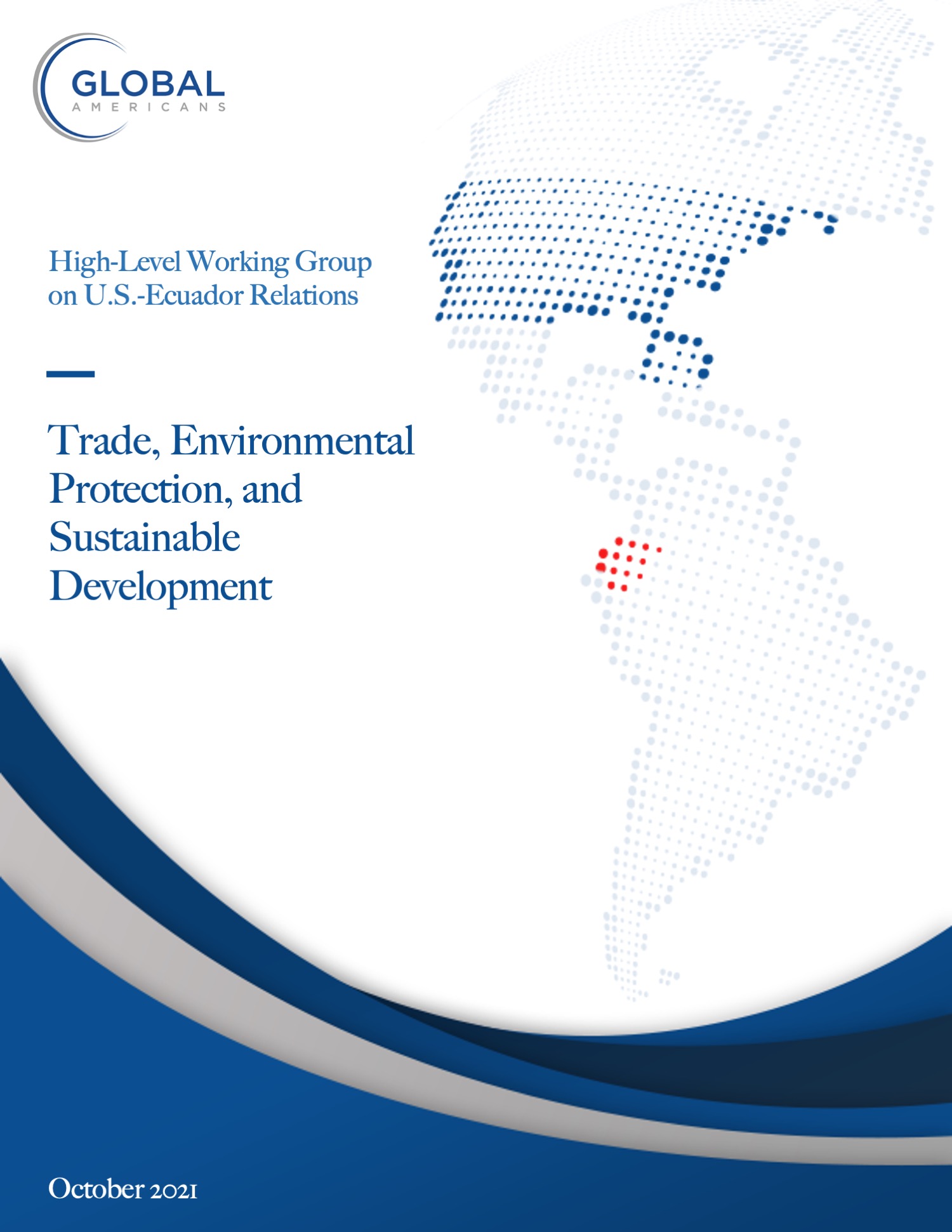 In the last three decades, trade agreements have grown to encompass not just economic issues, but also questions of Indigenous Peoples’ rights, traditional knowledge, and environmental protection. This report covers how NAFTA, the USMCA, and bilateral agreements involving both the United States and European Union have incorporated the environment into modern trade agreements. The report concludes with three recommendations. First, any potential trade agreement between the U.S. and Ecuador should include a chapter on the environment, similar to the USMCA. Second, civil society and public engagement must play a key role in guaranteeing enforcement. Third, the United States and Ecuador should consider an independent enforcement mechanism to dissuade either party from violating environmental protections. 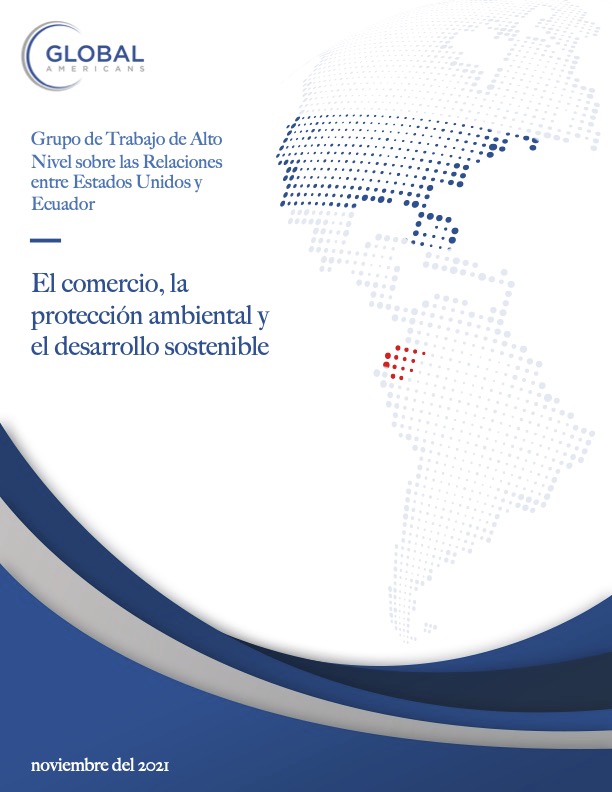 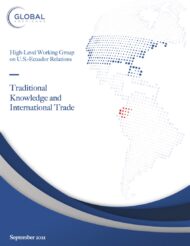 Traditional knowledge (TK) is an important aspect of modern trade negotiations. The concept shares a close relationship to both Indigenous Peoples’ rights and intellectual property, the topics of previous reports by the Global Americans High-Level Working Group on U.S.-Ecuador Relations. TK encompasses knowledge that is “passed on from generation to generation within a community, often forming part of its cultural or spiritual identity.” A particular area of emphasis within TK is genetic material. Certain Indigenous communities have used resources from plants, animals, and microorganisms for many generations, often for medical purposes. Disputes arise when individuals or firms attempt to patent products based in these resources, especially when it is unclear whether a product represents a genuine innovation. 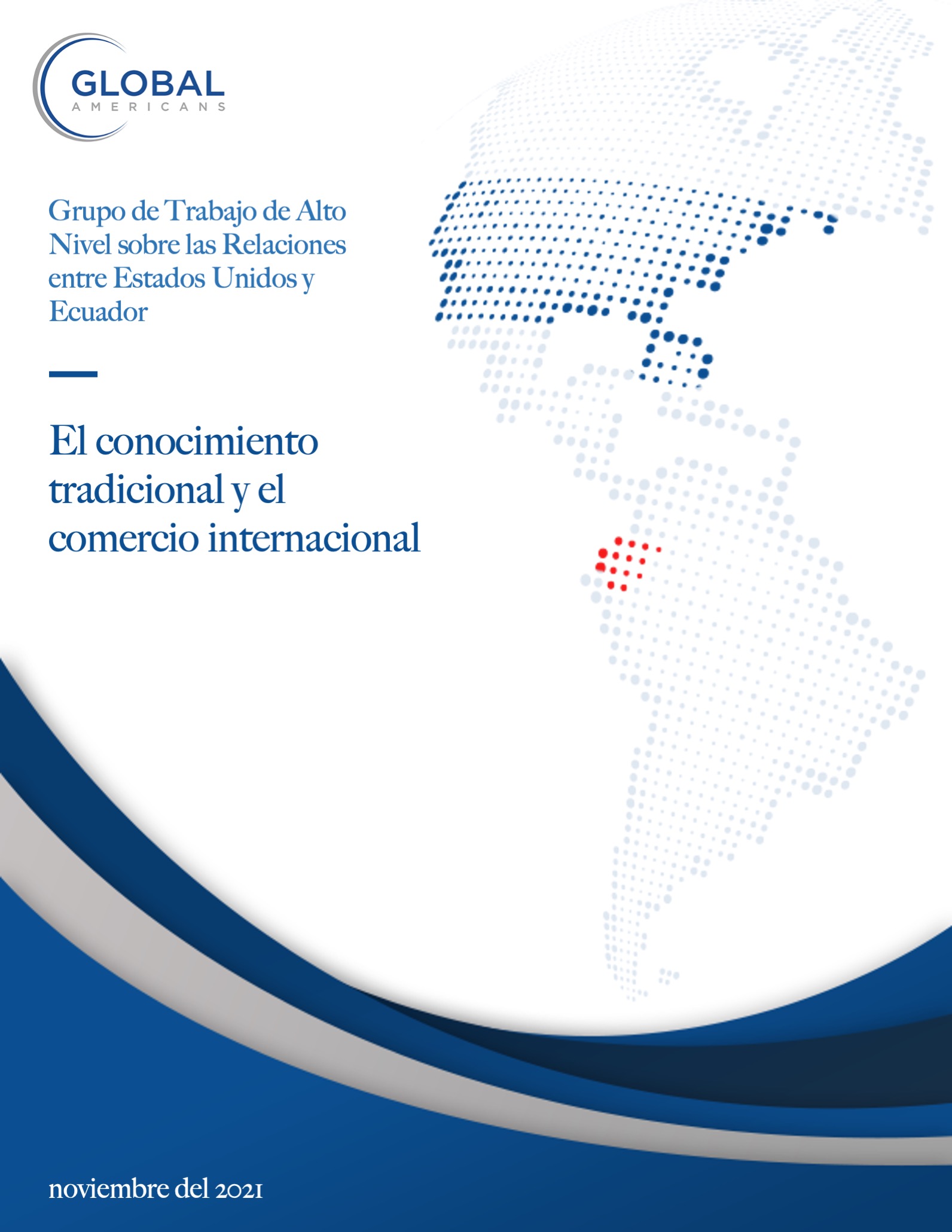 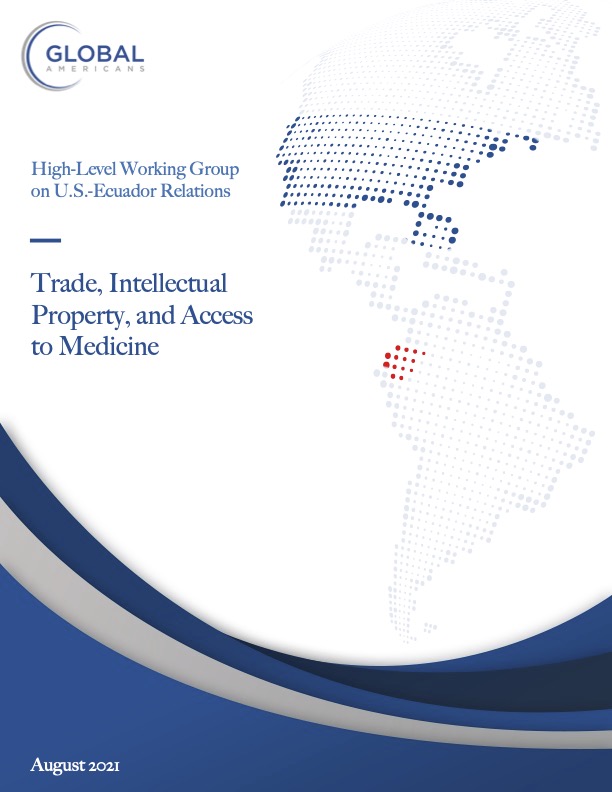 Policymakers must address two issues when it comes to access to medicine: underinvestment in new drugs and high prices for existing medicines. Intellectual property regulations are part of the solution to both problems. This report details the costs and benefits of stronger IP provisions, explains the legal and political context for IP and trade, and explores implications for Ecuador as the country seeks deeper commercial ties with the United States. 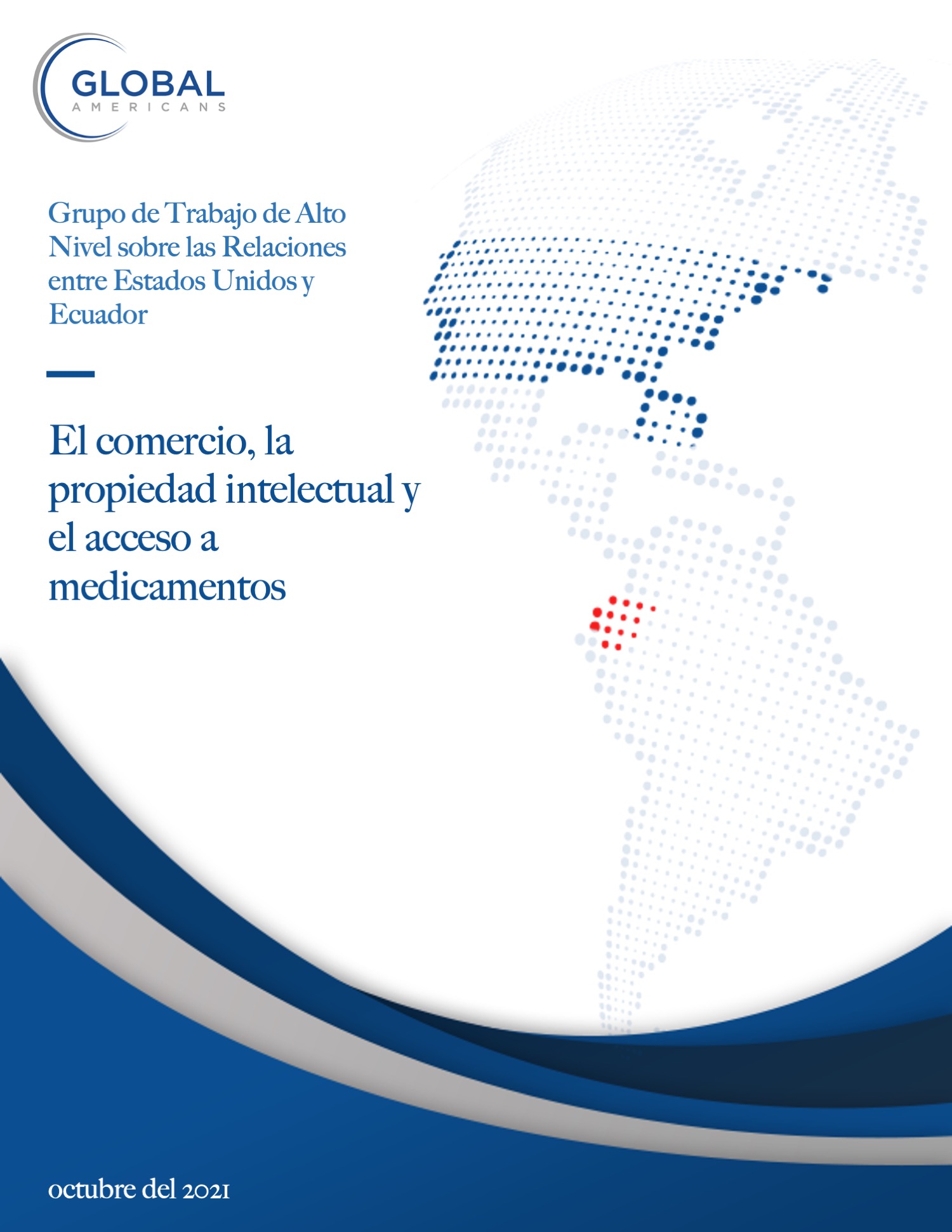 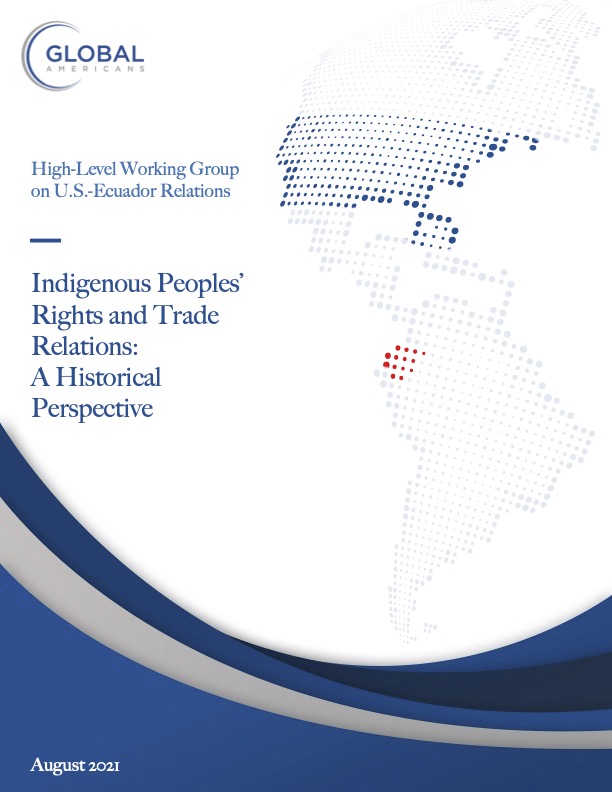 The United States and Ecuador have sought to deepen their economic relationship in the past, but twenty-first century trade and investment agreements have proven elusive since negotiations first took place in the early 2000s. A major reason for the failure of past negotiations was the opposition of Indigenous Peoples in Ecuador, who felt that they were not adequately represented in decisions and that their interests were not protected. In recent years, however, the U.S. and Ecuador have relaunched discussions regarding a trade agreement, and both law and politics have evolved to better incorporate Indigenous Peoples into the process. 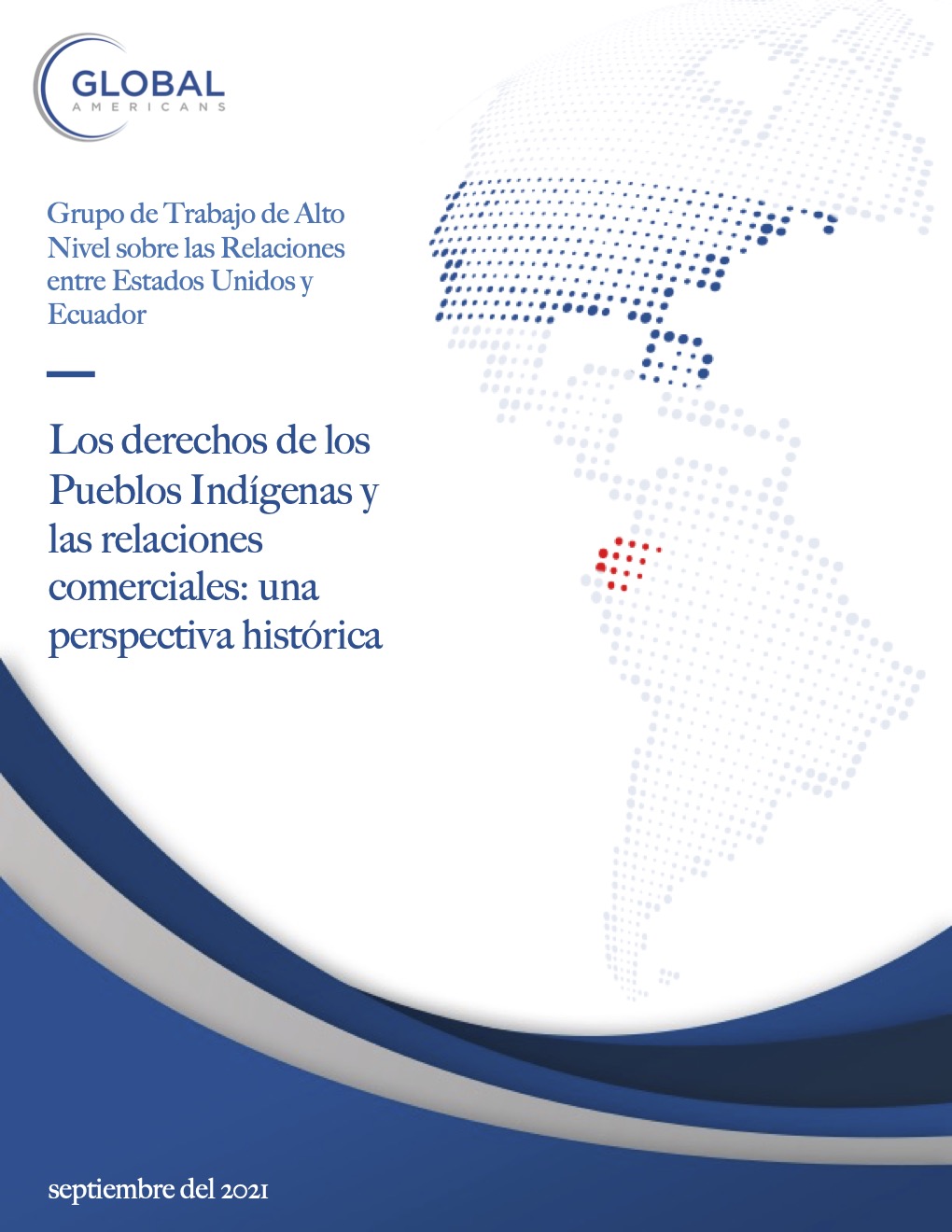 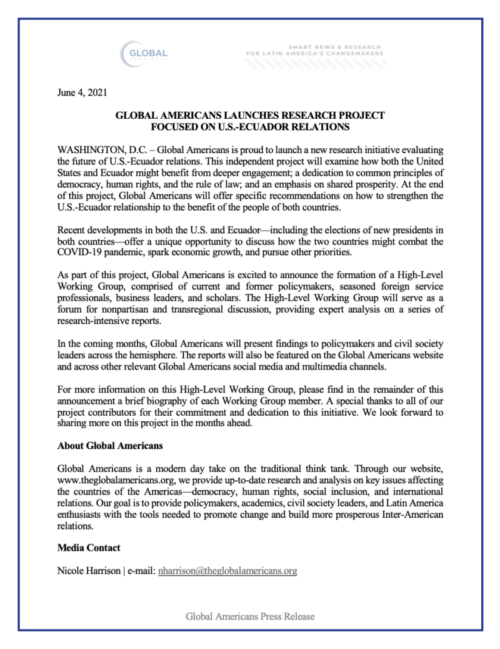 As part of this project, Global Americans is excited to announce the formation of a High-Level Working Group, comprised of current and former policymakers, seasoned foreign service professionals, business leaders, and scholars. The High-Level Working Group will serve as a forum for nonpartisan and transregional discussion, providing expert analysis on a series of research-intensive reports.