Along with Chile and Costa Rica, Argentina is one of the most stalwart protectors of human rights at the Council.

To study the actions of Latin American countries on the global stage, we examined the UN system, and in particular the UN Human Rights Council. Founded in 2006, the Human Rights Council is the successor to the largely discredited UN Commission on Human Rights founded in 1946. The Council consists of 47 members; eight seats are reserved for Latin American and Caribbean countries. This gives the region 17% of the votes, an outsize role given that Latin Americans compose 8.6% of the global population. States can be elected for three-year terms, though after two terms they must step down for at least one year before being elected again. The current (2016) LAC members are Bolivia, Cuba, Ecuador, El Salvador, Mexico, Panama, Paraguay, and Venezuela. We focus on two activities undertaken at the UNHRC, the Council resolutions on regional issues and the Universal Periodic Review (UPR) process, described later.

What has become apparent in our analysis of both the regional UNHRC votes and the UPR process is that the value given to human rights by the different Latin American governments falls across a spectrum. On one end are the countries of ALBA (Bolivarian Alliance of Our America): Cuba, Venezuela, Bolivia, Nicaragua, and Ecuador (though Ecuador periodically splits from the group). Along with Russia and China, these countries systematically give priority to the sovereignty of governments and deny any role to the international community to “interfere,” as they see it, in the domestic affairs of countries to protect the human rights of the citizens, particularly the civil and political rights that these countries (Cuba, Venezuela, etc.) often do not protect themselves. At the other end are Chile, Costa Rica and Mexico, which have, more or less consistently, voted to protect human rights throughout the region and the world.

Argentina and Brazil, two of the region’s political leaders, fall in the middle of these two extremes, with Argentina being the stronger supporter of human rights in the UNHRC regional votes. Brazil’s record in voting, with its hesitancy to protect human rights and its abstentions, does not match its self-proclaimed global role as a champion of human rights in the Global South. Argentina’s voting record, particularly given its choice of friends and allies under former president Cristina Fernández de Kirchner, belies expectations: along with Chile and Costa Rica, Argentina is one of the most stalwart protectors of human rights at the Council in regional votes.

The following charts reflect how Latin American countries have voted on three different, but important, regional topics at the UNHRC. The full spectrum of support for human rights across the region is clear in these charts: ALBA countries vote consistently against any human rights resolutions that would interfere in the decisions of a sovereign government, while Chile, Costa Rica, and Mexico, here joined by Argentina and many of the countries of Central America, voted to protect human rights in Syria, Ukraine and North Korea.

We included all the BRICS countries in order to view Brazil, as well as the other regional governments, in the context of the emerging Global South. These charts demonstrate that the Global South has not yet coalesced into a coherent voting bloc: China and Russia consistently voted alongside the Latin American ALBA coalition against almost any human rights resolutions, while India and South Africa abstain from making any concrete commitment for or against human rights. Using this BRICS lens, we see that Brazil is the most supportive of human rights on the global stage in that group, but, relatively speaking, that’s not saying much.

Votes for Human Rights in Syria

Since Syria’s descent into civil war in 2011, human rights atrocities have been committed by all sides but especially by President Bashar al Assad’s government. The United Nations Human Rights Council has taken up the issue multiple times, passing 15 separate resolutions calling for investigations into the “grave and deteriorating human rights and humanitarian situation” and possible war crimes being committed against the Syrian people. Latin American and BRICS countries have been split on voting to condemn the atrocities and calling for accountability, with most voting either 100% in support of or 100% against the resolutions. 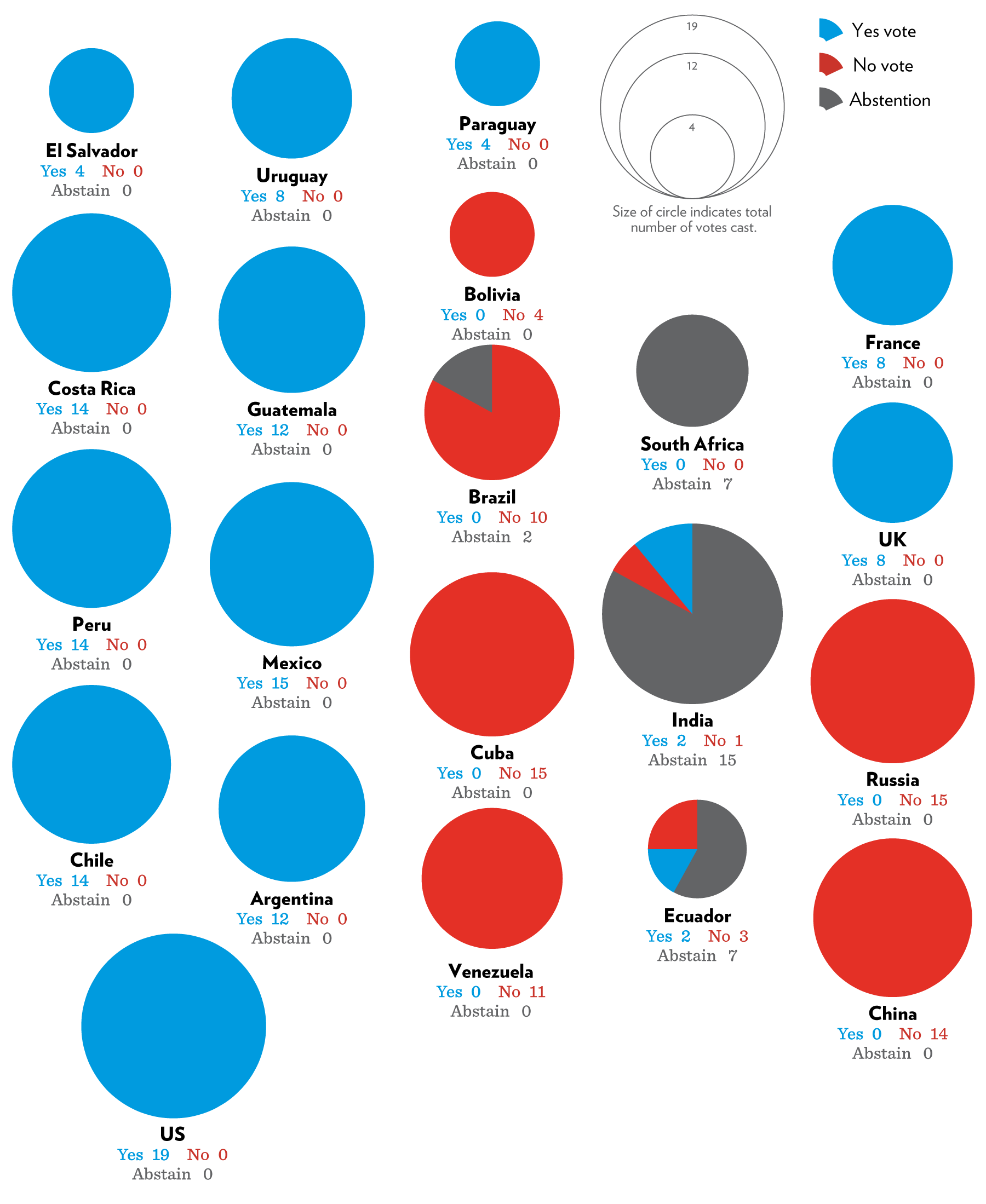 Despite documentation of forced labor camps, widespread torture and execution, North Korea has often been protected in international forums by those countries that do not abide any international interference in domestic affairs: Russia, China, Cuba, and Venezuela. The one exception: a resolution passed in April 2013 at the 22nd Council, after the UN Security Council approved new sanctions.

Protests and Violence in Ukraine

Ukraine emerged only recently as an issue for the UNHRC. The Council has voted on two separate resolutions, both regarding cooperation and assistance for Ukraine in human rights and calling for investigation into alleged human rights violations during protests and ongoing violence between separatists—supported by Russia—and the Ukrainian government.

Continue to The Universal Periodic Review