In this new period, the UN Human Rights Council (Council or UNHRC) voted on only one of the countries that we have been tracking, Syria.

From the region, Brazil, El Salvador, Mexico, and Paraguay voted in favor of the March 2017 resolution expressing concerns over the violation of international human rights in Syria and expressing support for the UN Secretary General’s special envoy to Syria. They were joined by Germany, the United Kingdom and the United States, along with 20 other countries.

Bolivia, Cuba and Venezuela voted against the resolution—as they had on all previous resolutions related to Syria, as well as to Ukraine. The vote confirms the bloc of countries’ opposition to upholding international human rights norms in the UNHRC. Outside the region they were joined by Burundi, Iraq and Kyrgyzstan. Interesting were the countries from the region that abstained. As it has at other times, Ecuador didn’t join its Bolivarian Alliance for the Peoples of Our America (ALBA) allies in voting against the resolution. In contrast to the 2016 vote, however, Paraguay and Panama, rather than voting in favor of the resolution as they had that year, chose to abstain. 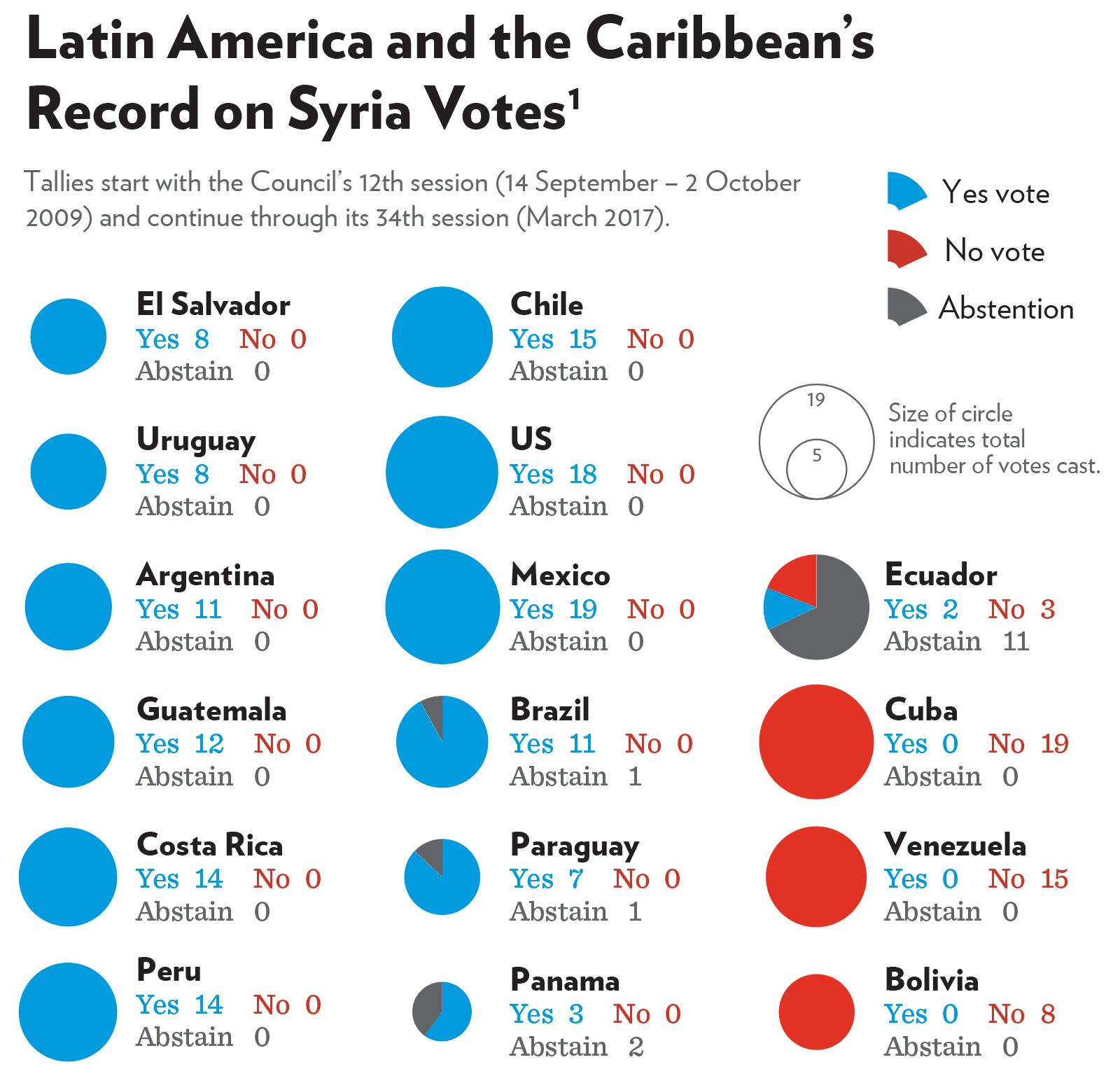 As the votes that we have been tracking demonstrate, the UNHRC’s commitment to denouncing and acting in defense of human rights has been spotty, at best. A large part of this has been due to the members on the Council. On the following page is a chart of UNHRC members over time and their Freedom House scores as a representation of their “democratic-ness” and respect for human rights. What is clear is not only are human-rights-abusing governments disproportionately represented on an international body intended to defend human rights, but the number of Freedom-House–determined “free” countries has declined over time.

We can see from the chart that the UNHRC is not a club of human-rights- respecting democracies. To the contrary, it has often served as a platform for non-democratic countries to defend themselves and even rhetorically attack democracies. Their efforts, as we have documented in our previous reports, have been “enabled” by even democratic or semi-democratic countries in Latin America, including Brazil under PT administrations, Bolivia under President Evo Morales, and Nicaragua under the Sandinistas.

Nevertheless, pulling the United States out of the body, as U.S. Ambassador to United Nations Nikki Haley has floated, would do more harm than good. For one, as our vote tracking has shown—despite some members’ support for clear human rights violators—the UNHRC’s overall body of work has helped to call attention to egregious cases of human rights abuses in Syria, Iran, North Korea, and Ukraine—and sometimes even gained majority support for those concerns. At the same time, the Universal Periodic Review (UPR) process has evolved, becoming an active process of exchange with civil society groups. 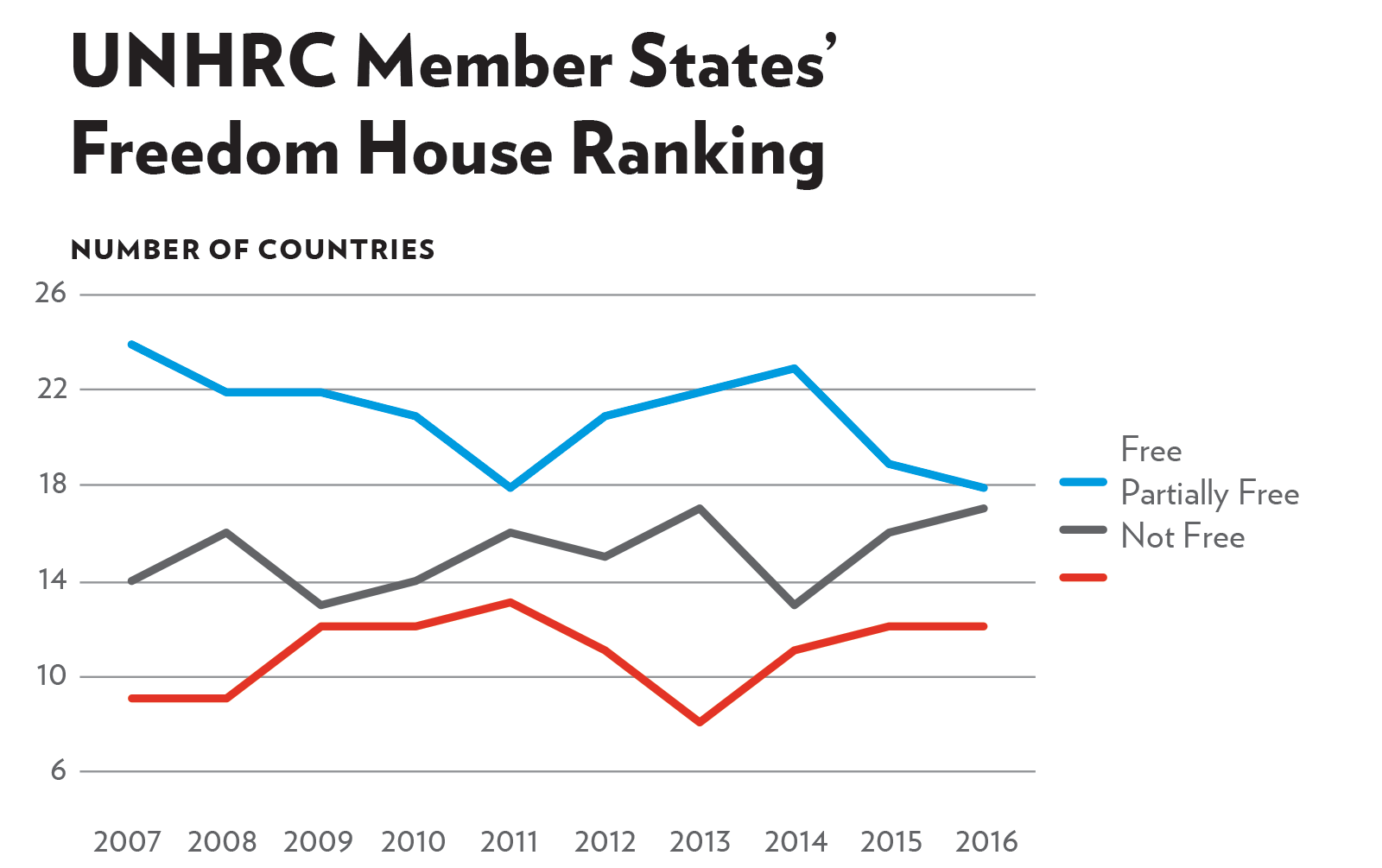 In many of those cases, the U.S. has played critical roles in bringing votes forward and in the success of resolutions. U.S. human rights NGOs too have assisted in that process. If the U.S. government were to pull out of the UNHRC, the Council would lose a key leader. At the same time, such a move by the U.S. government would weaken if not undermine the work and credibility of U.S.-based NGOs active around the UNHRC and the UPR process.

Rather than walk away, the U.S., its allies on the UNHRC, the human rights community, and scholars need to do two things. First, the U.S. needs to more actively track and publish the human rights-related votes and actions of countries across the United Nations system, including the UNHRC but also the UN’s Economic and Social Council (ECOSOC), the UN Security Council and the UN General Assembly. (For Latin American and Caribbean countries, this should also include member government’s actions regarding the inter-American human rights system and the Inter-American Democratic Charter.) Specific countries’ votes and actions should be included in the State Department’s annual Democracy, Human Rights and Labor Bureau’s (DRL) Human Rights Report to enable tracking not just of governments’ human rights records domestically but also of how they pursue them in their foreign policies. In an interconnected world, when the liberal order appears to be fraying, a country’s foreign policies regarding human rights and democracy matter as much as its internal policies.

Second, using this information, the U.S. and its allies and friends should actively work to promote and support those governments that have shown a commitment to human rights and democracy in multilateral forums. This should include advocating for their nomination and confirmation in multilateral bodies, including, but not limited to, UN bodies and regional groupings and economic and finance-oriented organizations.

Third, far from walking away from the UNHRC, the U.S. needs to work with its allies—the UK, Belgium, Germany, Japan, Netherlands, Panama, South Korea, and Switzerland, among others—and court new ones to reform the Council and to develop a committed bloc of countries to support more qualified members.

In this process, the U.S. should not shy away from criticism in the body. The country’s lack of participation in the most recent Inter-American Human Rights Commission hearings on U.S. cases was an unfortunate signal.

In addition to these policy changes, in a recent article in LatinAmerica­GoesGlobal.org, Gabriel Salvia and Mattias Peschke raise a set of potential changes to the charter of the UNHRC to improve the quality of its members. First, they write, “Article 7 of the resolution that created the Council needs to be modified to change the ballot from secret to public.” They argue that “[t]his would bring transparency that would allow the citizens of a democratic state to effectively control whether their country complies with the requirements for Member States demanded in articles 8 and 9. Furthermore, the public ballot would generate a healthy debate in democratic nations that support the election bids of authoritarian regimes.” Second, they propose “Article 9 that states that Member States have to cooperate fully with the Council, has to be enforced by binding the members to an open invitation to UN Special Rapporteurs.” In this way, the authors write, “countries like Cuba, China and Saudi Arabia would be obliged to grant the visits of … UN investigators.”2