Ever since its foundation, the Summit of the Americas has been an opportunity for the United States to promote its interests and reinforce its leadership in the region. Inaugurated in 1994 in Miami under President Bill Clinton, the Summit first largely worked to deepen economic ties through the planned creation of a hemispheric free trade agreement, the Free Trade Area of the Americas (FTAA), and to create a club of elected heads of state. Despite the collapse of FTAA negotiations during the subsequent administration of George W. Bush, the Summit has had some victories. Most noteworthy was the creation of the Inter-American Democratic Charter during the 2001 Summit in Quebec City, Canada, where member countries affirmed their shared commitment to defend representative democracy.

But this year, for the first time in the seven iterations of the Summit, the President of the United States did not attend. The April 2018 Summit in Lima reflected popular and political concern over the wave of corruption scandals that has swept across the hemisphere and was dedicated to “Democratic Governance against Corruption.” Choosing to stay in the U.S. to oversee the American response to the chemical attacks in Syria, President Trump’s failure to attend the Summit added to perceptions that the U.S. administration lacks a coherent, engaged policy for the hemisphere. (Trump’s absence followed former Secretary of State Rex Tillerson’s absence last year at the 47th OAS General Assembly.) In the president’s place, the American delegation was led by Vice President Mike Pence, Commerce Secretary Wilbur Ross, then-acting Secretary of State John Sullivan, the president’s daughter and senior advisor Ivanka Trump, and Overseas Private Investment Corporation (OPIC) President and CEO Ray W. Washburne.

In trying to deepen ties with Latin America, a day prior to the Summit’s inauguration, Ivanka Trump and Ray W. Washburne announced OPIC’s 2X Americas, a new women’s initiative that would allocate $150 million in seed funding for Latin American women entrepreneurs and potentially mobilize up to $500 million in private capital to invest in projects that empower women in the region. Vice President Pence also announced that the U.S. would be submitting a bid to host the next Summit in 2021. If accepted, the U.S. will be able to meet with regional leaders on its own turf and renew its commitment to the process and the region.

Hopefully, the 2021 Summit won’t come too late. If Trump’s absence from the April 2018 Summit was a sign of declining U.S. leadership in the region, then the other 18 heads of state that failed to show are a sign of a fraying Inter-American system. Completely absent from the Summit were the delegations of Venezuela and Antigua and Barbuda. Originally disinvited by former President Pedro Pablo Kuczynski, after weeks of taunting the government of Peru that he would arrive “by air, land or sea,” President Nicolás Maduro failed to show. Antigua and Barbuda boycotted in solidarity with Venezuela and sixteen other countries sent delegations led by their foreign ministers instead of their heads of state. (Ecuadorian President Lenín Moreno traveled to Lima but left before the Summit due to the murders of three journalists in Ecuador by dissident Colombian rebels; Vice President María Alejandra Vicuña took his seat at the Summit).

Excluding Venezuela and Antigua and Barbuda, who did not attend the Summit, the region that sent the fewest heads of state was the Caribbean; 10 of the region’s 16 countries failed to send a head of state. This disconnect between the Caribbean and the regional community isn’t anything new. In the past, Caribbean countries have either voted against or abstained from voting on resolutions dealing with the political and humanitarian situation in Venezuela. One of the most recent examples was the 47th OAS General Assembly, in which a U.S.-backed resolution on Venezuela that included the strongest language in its condemnation of the country failed to pass because Caribbean Community (CARICOM) countries refused to support it. Even though the resolution was put forward by the region’s most powerful players (including Mexico, Canada, Argentina and the U.S.), the inordinate voting power of the Caribbean bloc in a body that functions on unanimity effectively killed it.

Had the heads of state from the region’s other large countries—Argentina, Brazil, Canada, Chile, Colombia, Mexico, and Peru—failed to show, the Summit would have crumbled. Without their attendance, a Lima Group declaration condemning the May 20th, 2018 presidential election in Venezuela would never have been pushed forward or signed. The declaration by the Lima Group—made up of Argentina, Brazil, Canada, Chile, Colombia, Costa Rica, Guatemala, Guyana, Honduras, Mexico, Panama, Paraguay, Peru, and Saint Lucia and joined by the Bahamas and the United States—called on the Venezuelan government to “hold presidential elections with the necessary guarantees for a free, fair, transparent and democratic process, free political prisoners, including the participation of all Venezuelan political actors; and ratify that elections that do not meet these conditions will lack legitimacy and credibility.” Similar to Tillerson’s absence at the 47th OAS General Assembly, though, it is difficult to measure the effect that President Trump’s absence may have had on the group’s inability to get more member states to sign onto the declaration.

Head-of-State Attendance at the VIII Summit of the Americas

Only 17 out of 35 member states sent their heads of States to the Summit in Lima, an attendance rate of 48.6 percent. 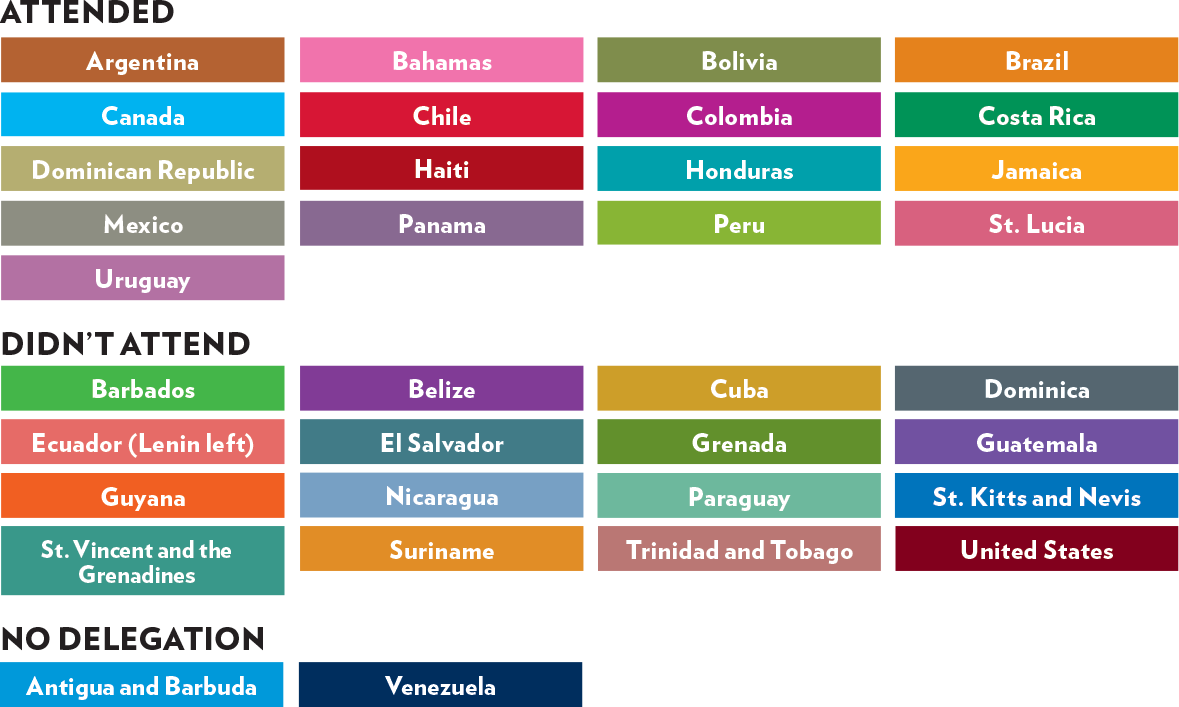 Following the theme of the 2018 Summit, “Dem in scandals and citizens continue to grow more frustrated with their governments and the political class over corruption. Peru, the host of the Summit, was not immune to the scandals. Weeks before the hemispheric confab took place, former President Pedro Pablo Kuczynski resigned from his post before a second impeachment vote in Congress, following the discovery that his firm received money from Brazilian construction company Odebrecht.

The Lima Commitment, which was agreed to by acclamation, is a testament to the region’s stated commitment to fight corruption through broader cooperation among nations and the strengthening of institutions. The Commitment called for 1) reinforcement of democratic governance; 2) transparency, access to information, protection of whistleblowers, and guarantees of human rights, including freedom of expression; 3) public and transparent financing of political organizations and election campaigns; 4) prevention of corruption in public works, public procurement and contracting; 5) improved international legal cooperation in the fight against bribery, international corruption, organized crime, money laundering, and asset recovery; and 6) strengthened Inter-American and anticorruption mechanisms.

While some of the Commitments’ recommendations seemed quite general, such as “strengthening democratic institutions for the prevention of and fight against corruption in the Hemisphere, ensuring that the competent authorities have the necessary guarantees for the proper performance of their functions,” other points provide the necessary steps for governments and the OAS to strengthen anticorruption efforts.

With seven in ten people in Latin America and the Caribbean standing ready to support anticorruption efforts, according to Transparency International, the OAS and its member states must start making a real commitment towards fighting corruption.

Recommendations for the Successful Implementation of the Lima Commitment

Similar to the work done at the VIII Summit of the Americas, Global Americans, through its High Level Working Group on Inter-American Relations and Bipartisanship, published a set of recommendations targeting corruption in the hemisphere, titled Addressing Corruption in Latin America and the Caribbean Furthers U.S. National Interest1. The report calls for regional collaboration to address the structural causes of corruption in a way that strengthens democracy and promotes inclusion and economic growth. These recommendations gathered the expert opinion of more than 50 policymakers, academics, civil society, and business leaders from across the region.

When governments work together, it becomes much easier to prevent, detect, sanction, and, ultimately, eradicate corrupt practices. The chances of success further increase when efforts are coordinated with the private sector and an active, professional civil society. In other words, when good governance models are set in motion, when governments manage public resources in a transparent and responsible way, corruption and its multiple sources can no longer operate with impunity.

Some of our recommendations include