The Inter-American Commission on Human Rights (IACHR or Commission) has met three times since our last report. Over the span of our three reports—a year and a half—several things stand out. First, with the election of Mauricio Macri in Argentina, the government’s cooperation with the IACHR has increased. In our first report, Argentina scored a 0 after the government of then-president Cristina Fernández de Kirchner refused to cooperate with a hearing on judicial independence. By our second report that score had increased to a 3, and in this report over five cases it averaged 2.4. (However, see the analysis below of the candidate the Argentine government nominated for one of three empty slots in the IACHR.)

Argentina’s cooperation with the IACHR has improved under the Macri administration, though the government nominated a weak candidate to the Commission this year.

The change of government in Brazil—after the controversial impeachment of former president Dilma Rousseff—has produced no equivalent change in the South American country’s cooperation with the Commission. Under the administration of President Michel Temer, Brazil remains as cooperative with the IACHR as before. Nevertheless, as we discuss below, the Brazilian government did put forth a qualified, progressive human rights jurist as its candidate for the Commission.

Across the other countries, those that remain stalwart liberals in the international order and on regional human rights issues remained so in this report. They include Chile, Costa Rica and El Salvador.
On the flip side, those who have consistently been uncooperative or rejected the IACHR and the inter-American system remain so in this report, and have been joined by two additions that we hope are temporary. Since we began our monitoring project, Cuba, Nicaragua and the Dominican Republic have consistently been outliers in the region, resisting the IACHR’s jurisdiction and—by implication—the application of international human rights norms.

But in this period the U.S. and Guyana have joined Cuba, the Dominican Republic, and Nicaragua. As we discuss in the sidebar, the U.S. administration defended its decision, but by association it was allied with the hemisphere’s rogue regimes. Oddly, even Venezuela performed better in this report than the United States in terms of cooperation with the inter-American system.

In a move that has linked it with the likes of Nicaragua and Cuba, the U.S. government didn’t attend the Inter-American Commission on Human Rights’ April 2017 hearings on the four cases related to the United States. The three hearings scheduled were: “Isamu Carlos Shibayama and Others,” which dealt with the plight of Japanese immigrants in Latin America who were forced into American internment camps during World War II;” “Impact of Executive Orders on Human Rights in the United States” (concerning the orders “Border Security and Immigration Enforcement Improvements,” “Protecting the Nation from Foreign Terrorist Entry into the United States,” and “Expediting Environmental Reviews and Approvals for High Priority Infrastructure Projects”—all of which addressed the Donald Trump administration’s executive orders on immigration policy) and “Policies that Prevent Access to Asylum in the United States,” which raised concerns on the challenges of asylum seekers in the United States.

In a statement, the U.S. State Department justified its absence by arguing “it is not appropriate for the United States to participate in these hearings while litigation on these matters is ongoing in U.S. court.” And yet, the presence of U.S. representatives would not have had any impact on ongoing litigation. And U.S. government officials have attended previous hearings on controversial issues that had been the subject of litigation. The U.S. absence from the IACHR hearings sets a worrisome precedent for future hearings and has the potential to weaken U.S. influence in the region. The next time a government deems a hearing “unfair” and refuses to attend, it can now argue that the U.S. has done the same or that its case too is under some form of consideration internally, exempting it from attending. The action also undermines U.S. moral authority to criticize other countries that may resist or even attack the Commission and its actions. 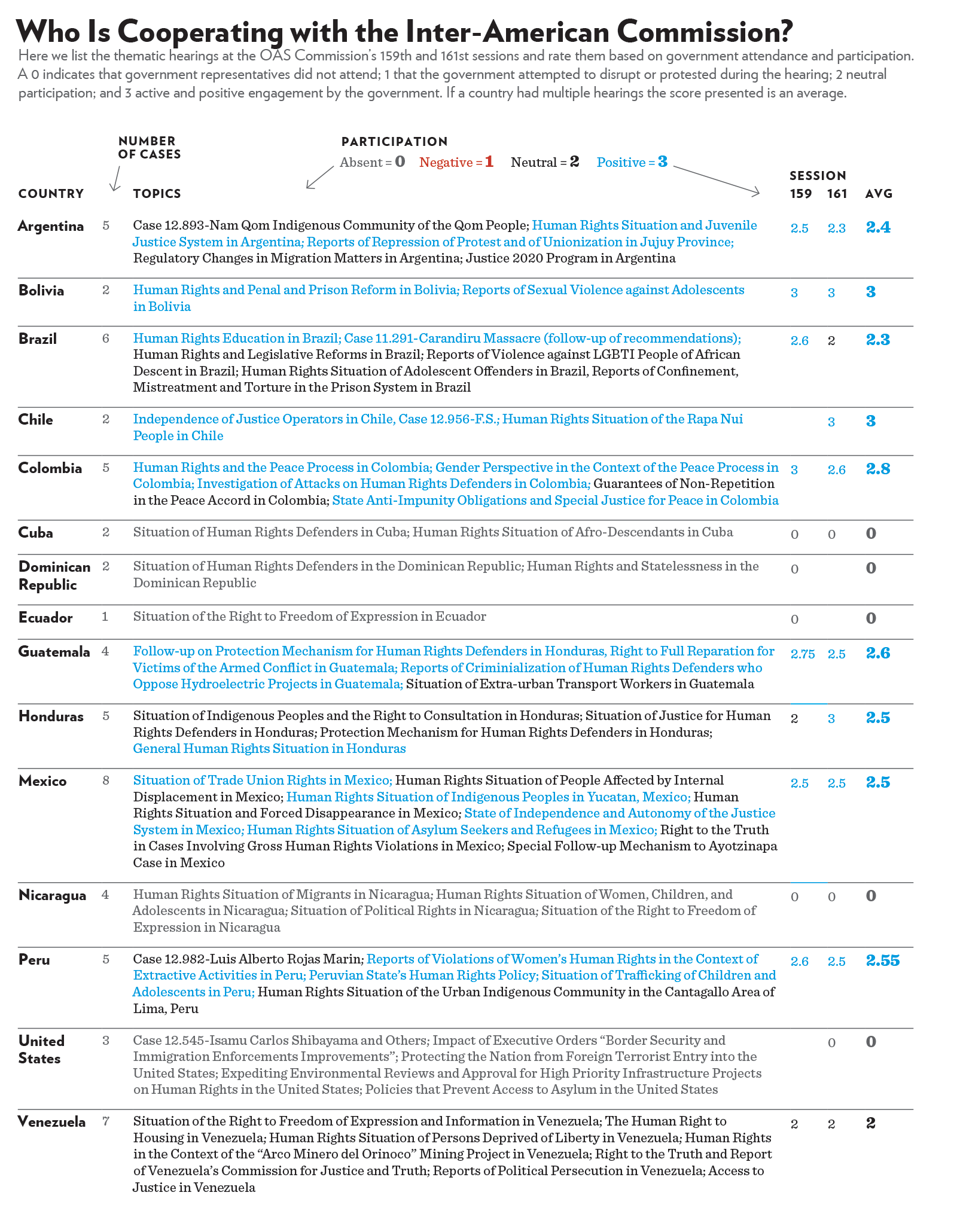 IACHR Nominees
In recent years, the inter-American system has come under criticism and even attack by OAS member states. From the efforts by Ecuador, Argentina and Venezuela to strip the IACHR of much of its authority and functions, to the veiled attacks by the Mexican government on the Commission’s special team sent to investigate the Ayotzinapa massacre, to the U.S. government’s recent refusal to participate in the Commission’s hearings on U.S. cases, the inter-American system has been buffeted. A large part of its future and success will hinge on the quality and independence of the jurists that sit on the Commission and the Inter-American Court of Human Rights (the Court).

In addition to how member governments participate in and accept the authority of the IACHR and the Court, the candidates who governments propose to fill the body are an important indication of a state’s commitment to the integrity, professionalism and independence of the inter-American system.

The candidates governments propose to fill the Commission and Court are an important indication of a state’s commitment to the inter-American system.

Below are biographies of the six candidates who were nominated by member governments (Argentina, Brazil, Chile, Mexico, United States, and Uruguay) to fill three positions on the IACHR. The nominees were voted on at the June 2017 General Assembly. Who member governments put forward for the three open slots, however, is telling of their respect and commitment to the region’s premier human rights bodies. A number of human rights groups signed letters raising concerns about the nominee from Argentina and the nominee from Mexico, but in all cases, there have been criticisms.

To present the nominees comparatively, Global Americans developed a scoring system that runs from –2 to 8 for each candidate based on education, experience and credibility. In the footnote below we explain how the scoring system works.3

The candidates are listed below alphabetically by country.

Carlos Horacio de Casas (Argentina)
Score: 3
Carlos Horacio de Casas is a professor of criminal law at Universidad de Mendoza. He has worked for the Argentine government in various capacities, including as director of penal affairs in Mendoza province from 1984 to 1986; legal counsel to the government of Mendoza from 1986 to 1989; and representative of the Central Bank of Argentina in Mendoza from 1986 to 2000. In human rights circles in his native Argentina, de Casas is best known as a defender of free speech; he has represented jailed journalists in cases before both the Inter-American Commission on Human Rights in Washington and the UNHRC in Geneva. He holds a law degree from Universidad Nacional del Litoral in Santa Fe, Argentina, and a business degree from Universidad Adolfo Ibáñez in Santiago, Chile.
Criticism: De Casas has been criticized by Argentine human rights groups and opposition political parties for defending a soldier, Enrique Blas Gómez Saá, who worked as an intelligence agent for the government during the Argentine military dictatorship. Many human rights groups note that de Casas’s defense of the soldier is his only public interaction with the aftermath of the dictatorship; he has never defended victims of the government.

Flávia Cristina Piovesan (Brazil)
Score: 6
Flávia Cristina Piovesan is a professor of constitutional law and human rights at the Pontifícia Universidade Católica de São Paulo. Since 1991, she has been a São Paulo state attorney; as a state attorney, Piovesan coordinated the state’s Working Group on Human Rights from 1996 to 2001. She has written four books on human rights and co-authored or edited many more books and journal articles on the topic. In Brazil, Piovesan is best known for her fight against the criminalization of abortion, which she calls the product of an unequal and sexist society. In 2016, Brazilian president Michel Temer appointed Piovesan Special Secretary for Human Rights. She holds a master’s and a PhD in constitutional law from the Pontifícia Universidade Católica de São Paulo.
Criticism: Piovesan’s nomination has been criticized by moderate and right-wing Brazilians, who view her as an extreme left-wing nomination.

Antonia Urrejola Noguera (Chile)
Score: 3
Antonia Urrejola Noguera is a Chilean technocrat and human rights lawyer. She has held numerous human rights-related positions in the Chilean government, including as human rights advisor to the minister of the interior from 2003 to 2005 and her current position as advisor on human rights to the minister secretary general of the presidency, which she has held since 2014.
In addition to her national government background, Noguera has experience with the OAS; she served as senior advisor to the secretary general of the international body from 2006 to 2011. In Chile, Noguera is known for her advocacy work for indigenous rights and environmental human rights issues. She holds a law degree from Universidad de Chile.
Criticism: There is very little information on Noguera online and she has little exposure outside Chile in human rights circles.

Mexico’s candidate to the Commission was a career diplomat with no experience litigating or working on human rights outside the government.

Joel Hernández García (Mexico)
Score: 2
Joel Hernández García has been a member of the Mexican foreign service since 1992. Currently, he is on the board of directors at the United Nations Interregional Crime and Justice Research Institute (UNICRI), works as an international advisor to the American Law Institute, and is seeing out a four-year term (2015–2018) on the OAS Inter-American Juridical Committee. García has worked for the Mexican Secretariat of Foreign Affairs in various capacities, including as legal counsel to the secretary of foreign relations from 2005 to 2011 and permanent representative of Mexico to the OAS from 2011 to 2013. He holds a law degree from Universidad Nacional Autónoma de México and a master’s in international law from New York University.
Criticism: García’s nomination has been criticized by numerous human rights groups. They point to his career in the Mexican foreign service as proof that he’s incapable of serving on the Commission as an impartial arbiter of unfavorable judgments to governments throughout the region, especially in cases that involve the interests of the Mexican government.

Douglass Cassel (United States)
Score: 6
Douglass Cassel is professor of law and a Presidential Fellow at University of Notre Dame. He has served three four-year terms on the board of the Justice Studies Center of the Americas and has been president of the board two times. Cassel has filed numerous amicus curiae briefs in the United States Supreme Court concerning, among other things, the rights of prisoners at Guantanamo. He has represented victims of human rights violations from across Latin America in cases before both the Inter-American Commission and the Inter-American Court of Human Rights. He holds a law degree from Harvard.
Criticism: Cassel has been criticized for using his clout as a well-respected human rights advocate to attempt to weigh in on the controversial Ecuador-Chevron case while accepting payments from Chevron. Cassel has admitted to taking payments from the company. Much of the criticism from members of the human rights and academic communities comes from an “open letter” written by Cassel, in which he labels a court decision in Ecuador regarding Chevron’s alleged environmental and human rights abuses in the country “illegitimate.”

Gianella Bardazano Gradin (Uruguay)
Score: 4
Gianella Bardazano Gradin is a professor of philosophy of law and legal theory at Universidad de la República in Montevideo. She specializes in human rights issues stemming from Uruguay’s military dictatorship and the human rights consequences of the decriminalization of drugs in the country and has published numerous journal articles on both topics. Gradin serves on the board of directors at the Institute of Legal and Social Studies of Uruguay (IELSUR). In 2010, she became a member of a special commission on reparations for victims of “state terrorism” during the military dictatorship. Gradin holds a law degree and a master’s in human sciences from Universidad de la República; she is a PhD candidate in law at Universidad Nacional del Litoral in Santa Fe, Argentina.
Criticism: As with Noguera, the Chilean nominee, there is very little information on Gradin online. She faces the same regional exposure issues as her Chilean peer.