Tweet
Share
WhatsApp
Email
The big surprise was the abandonment of support for Venezuela from some PetroCaribe countries, such as Bahamas, Belize, Guyana, Jamaica, and Suriname.

The Inter-American Democratic Charter was invoked this year by OAS secretary general Luis Almagro. On June 23, 2016, after 4 hours of reports and speeches, the OAS Permanent Council meeting on the state of democracy in Venezuela ended without coming to any conclusion. But that was only half the story. The real drama and showdown came during the vote over the agenda.

Venezuela didn’t want the hearing to be held at all and had worked hard before the vote to reject the agenda from the outset—effectively trying to end the meeting before it even began. Nicaragua and Bolivia echoed this in their preliminary remarks, attempting to change the conversation from Secretary General Luis Almagro’s report to a call for his resignation.

Eighteen votes were needed to simply continue with the agenda for the day. After much confusion (including delegates asking multiple times, “What are we voting about?”), the agenda received 20 in favor, 12 opposing, and 2 abstentions. What is interesting is where countries strayed from their expected positions, namely those countries that have previously protected Venezuela from any criticism.

Unsurprisingly, almost all of the countries of the ALBA alliance voted in support of Venezuela—i.e., to reject the agenda. (The sole exception was St. Lucia, which abstained.) However, except for the ALBA countries of Ecuador and Bolivia, South America, including regional leaders of Argentina and Brazil, voted solidly to recognize the right of the secretary general to call the meeting, implement the agenda, and hear Almagro’s report.

The big surprise was the abandonment of support for Venezuela from some PetroCaribe countries, such as the Bahamas, Belize, Guyana, Jamaica, and Suriname, even though they have historically benefited from Venezuela’s oil largesse.
What caused these countries to abandon their benefactor? With low oil prices and its own economy collapsing, Venezuela has had to scale back the PetroCaribe oil-assistance program, possibly causing some of these countries to no longer feel beholden to President Nicolás Maduro.

Or maybe countries are just waking up to the fact that things are not so wonderful in one of “the most developed democracies, not only in the region, but in the world” (according to Venezuela’s ambassador at the meeting), and that the state of democracy really is in crisis in Venezuela. Either way, by failing to halt the meeting, Venezuela helped to demonstrate regional action is possible, even if still not probable, and unwittingly prove its diminishing clout in the hemisphere.

It seemed like a simple vote on an agenda for a meeting. But the vote in the OAS Permanent Council on June 23 went to the heart of the right of the body to discuss the deteriorating democratic situation in Venezuela and the authority of the secretary general to report on it. Here is how member states voted. Their ties to Venezuela—in PetroCaribe or ALBA—turned out to be less of a predictor of votes than usual. 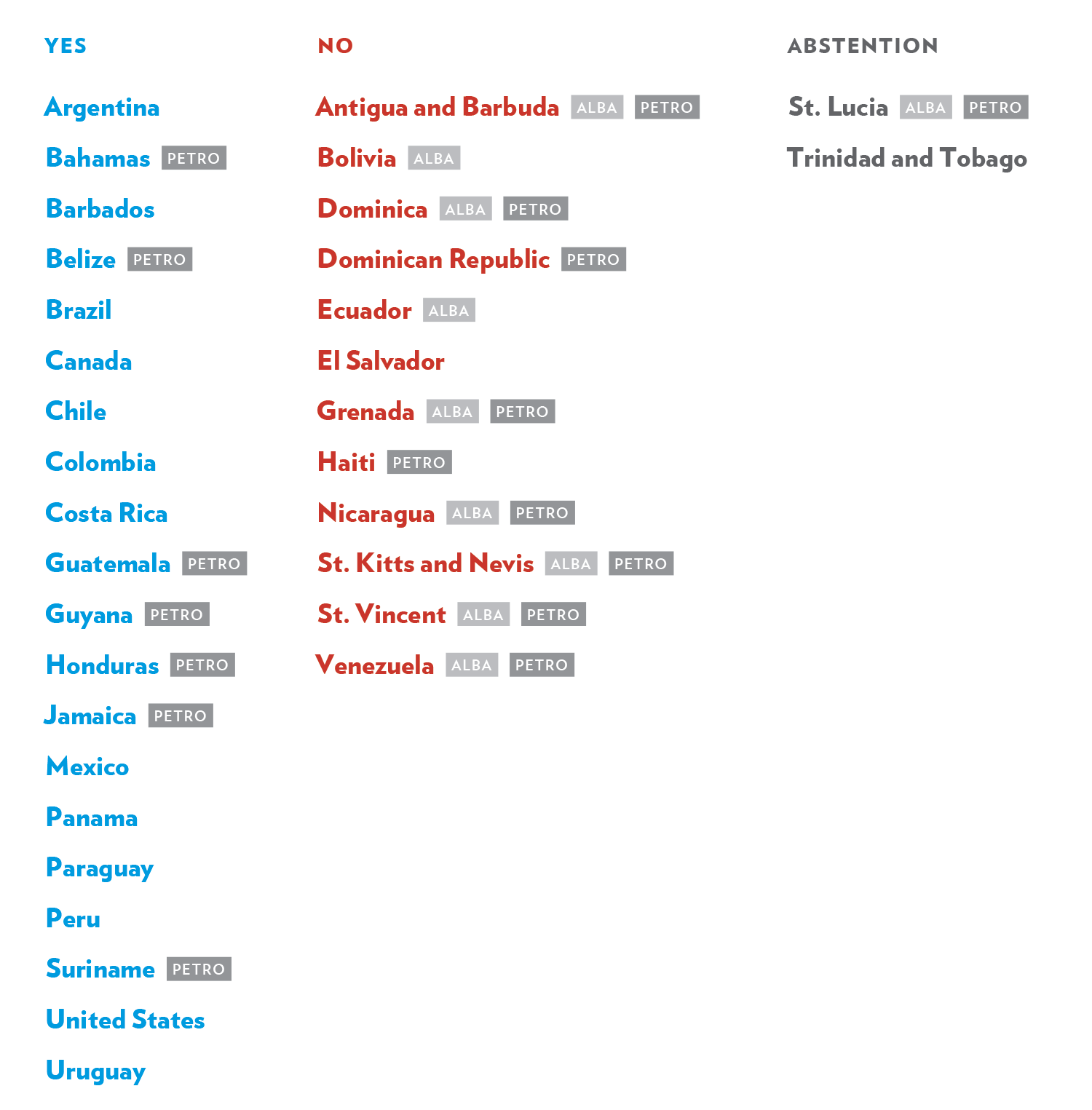 In May 2016, the Inter-American Commission on Human Rights (IACHR or the Commission) issued an urgent press release announcing that, due to a significant budget shortfall, the Commission would be laying off 40 percent of its staff in July and suspending two of its thematic hearings sessions as well as all planned trips by the Commission around the region for the rest of the year. The announcement embarrassingly highlighted that European countries such as Sweden, Denmark, France, and Spain, were some of the largest supporters of the Commission while countries in the Americas, except the U.S., were pulling up short in their obligations. With the economic crises in Europe, extra-hemisphere actors were curtailing their donations. Unfortunately, though, regional member states (and beneficiaries) of the IACHR failed to step up to fill the gap.

In fact, in recent years, many regional actors have complained about the extra-regional support given to the IACHR as undermining the system’s credibility. However, when given the opportunity to address their own complaints and bolster the legitimacy of the regional body, most have demurred.

But since the first alarm bell was sounded, multiple member states as well as international organizations have stepped up with contributions to help support the Commission’s work. The regional body has now received funds or letters of commitment from Antigua and Barbuda, Argentina, Colombia, Panama, Peru, Chile, and Mexico, and it is in talks for further contributions from the United States, the EU delegation in Mexico, the United Nations Refugee Agency, and the Central America and Mexico Migration Alliance. If those commitments are met, the IACHR will be able to hold the hearings originally scheduled for the end of the year that it had suspended and renew staff contracts expiring in November and December.

While these donations and commitments (if all received) will help, many activities remain suspended, and one-time contributions will not fill the long-term budget gap. Member states, those that have benefited from the Commission’s work in years past and today (by defending human rights of citizens and setting regional legal precedent) need to step up, commit to long-term support, and speak out publicly and loudly about the importance—historical and current—of the IACHR. And yes, at times, this includes criticizing those same member states that are financially supporting the Commission. So who’s willing to do it? History, precedent, and the future of human rights in a hemisphere that has set an example for the world depend on it.