Tweet
Share
WhatsApp
Email
Predictably, the Dominican government denounced a Commission report on its treatment of Dominicans of Haitian descent as full of “inaccuracies, prejudices, obsolete judgements and serious omissions.”

In the four months since our first report we have continued to monitor the thematic hearings of the OAS Inter-American Commission on Human Rights (IACHR or Commission). There have since been two sessions of hearings, the 157th, held in March 2016, and the 158th, held in June 2016, in Chile, as a special session. Unfortunately—as we discussed in the previous section—the 159th session was canceled due to the severe financial crisis of the IACHR. The 158th hearings in Chile were only one week, so fewer countries and cases were involved; as a result we have included a weighted average here.

This round of hearings does not hold many surprises from our previous monitoring. Once again, there is a clear split between the countries that object to the hearings, if they bother to attend at all, and those that attend and engage with the Commission. The countries acknowledging the human rights issues within their borders and embracing the need to address them included countries from both the right and left, from Colombia and Peru to Bolivia and Brazil. Those shunning or objecting to the hearings included Cuba, Nicaragua, Venezuela (at the 157th hearings), and the Dominican Republic. The ALBA countries continued to object to any international oversight on what they view as purely domestic issues. The Dominican Republic, while not part of ALBA, has continued its resistance to any international or regional comment or exhortation on the issue of its treatment of Dominicans of Haitian descent. In the months before this hearing, the IACHR produced a report documenting the government’s policies and actions against Haitians in the Dominican Republic and Dominicans of Haitian descent, including illegal expulsion. Predictably, the Dominican government denounced the report, calling it full of “inaccuracies, prejudices, obsolete judgments and serious omissions.”

However, there is one surprise. Venezuela has historically attended the hearings but objected vehemently to any concerns over human rights abuses in the country and the legitimacy of the Council to discuss them. For example, at the 157th hearing, at a discussion of the mounting economic crisis in the country, the Venezuelan representative stated “Things should be dealt with in context, and yes, I call attention to the Commission for the irresponsibility of handling this as an issue of ‘humanitarian crisis’ when there is no humanitarian crisis. In our view this is a political issue.” But by the 158th, Venezuela had changed its tune and acknowledged the problems in the country and the need to address them. This led Venezuela’s score to increase from 1’s in the 157th hearings to a 2.5 (out of 3) in the 158th.

Since both hearings took place after the December 2015 legislative elections won by the opposition, and with the foreign ministry still controlled by Maduro’s government, the change is most likely due to the administration’s inability to deny the deteriorating humanitarian situation in the country—with growing food lines, riots, and evidence of patients dying in hospitals due to lack of medicine, equipment and electricity—than a wholesale intellectual change of heart concerning the legitimacy of the regional human rights norms and their institutions. (If there was any doubt about that, the behavior of the Venezuelan ambassador to the OAS at the Permanent Council discussion of the human rights situation in June 2016 showed that little had changed in the government’s view of claims of popular sovereignty.)

Who Is Cooperating with the Inter-American Commission?

Here we list the thematic hearings at the OAS Commission’s 157th and 158th sessions (March and June 2016) and rate them based on government attendance and participation. A 0 indicates that government representatives did not attend; 1 that the government attempted to disrupt or protested during the hearing; 2 neutral participation; and 3 active and positive engagement by the government. If a country had multiple hearings, the score presented is an average. 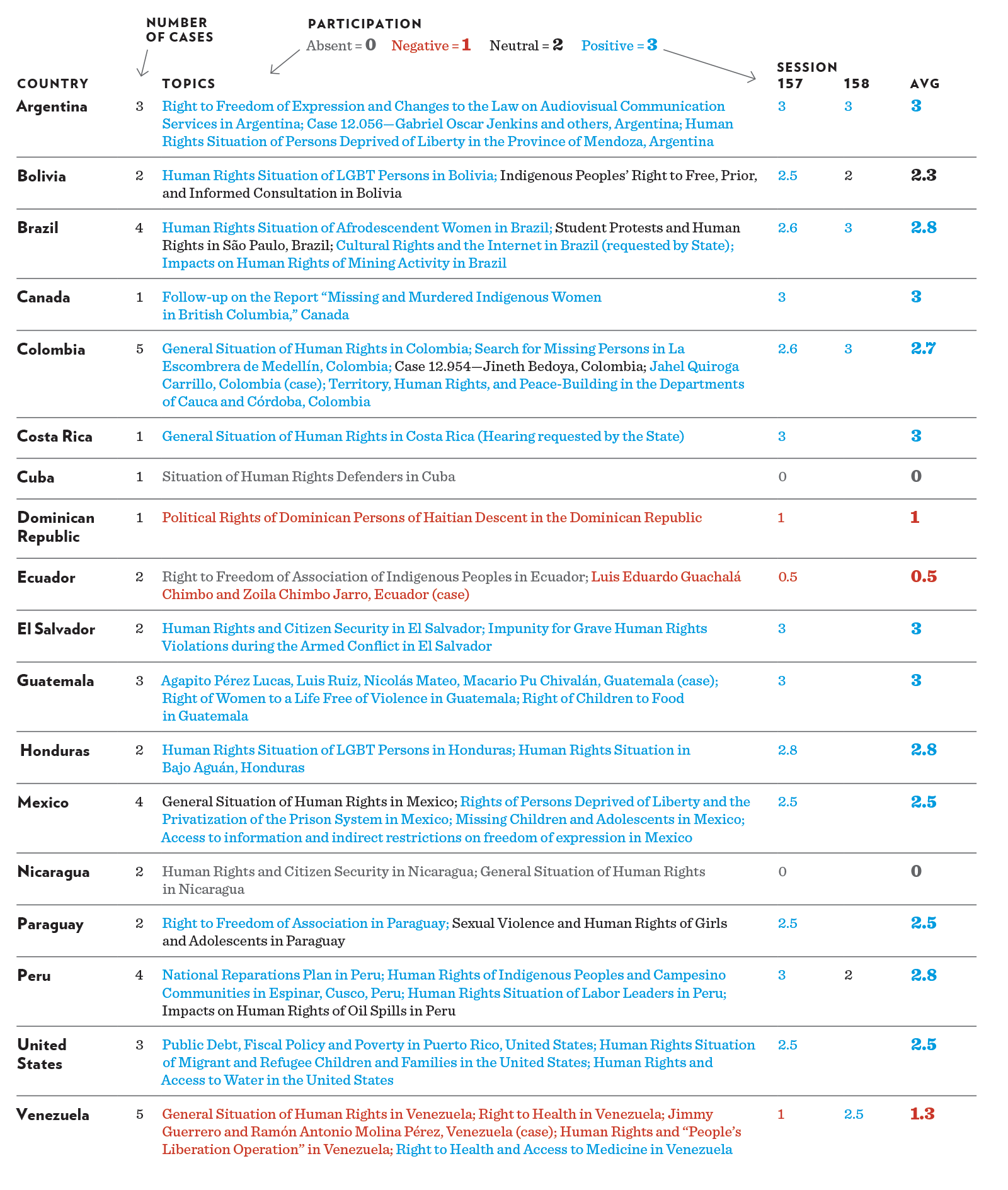 As in our UPR section, for our case studies of the Inter- American Court of Human Rights (Court) we look at examples in which the Court, under the Inter-American Convention on Human Rights, reinforced the responsibility of the state to both defend and protect the rights of civil society. Precedent set by the Court’s decision established the rights of independent civil society organizations as human rights.

Kawas-Fernández v. Honduras
April 3, 2009
Jeannette Kawas Fernández was the president of an environmental organization (Foundation for the Protection of Lancetilla, Punta Sal, Punta Izopo and Texiguat) that works to improve the quality of life for those living in the Bahía de Tela region of Honduras. Much of the work focused on bringing public attention to the pollution of rivers and forests and blaming private actors of attempting to “illegally appropriate” the area of Punta Sal.

In 1995, Fernández was murdered. Those responsible were never brought to justice. In its application to the Court, the Inter-American Commission on Human Rights held that, following her death, “serious omissions revealed that the State authorities did not adopt with due diligence all the necessary measures to conduct an investigation.” The Court agreed, and ruled that the state must pay compensation, carry out the required criminal proceedings, publicly acknowledge responsibility, and carry out a national awareness campaign recognizing the work performed by environmentalists and their contribution to the defense of human rights.

Huilca-Tecse v. Peru
March 3, 2005
On December 19, 1992, Pedro Huilca Tecse, a trade union leader in Peru, was murdered in what appeared to be an extrajudicial execution linked to La Colina, a death squad with ties to the Peruvian Army’s intelligence service. Huilca Tecse had been a vocal critic of government labor policies, quite likely making him a target. After the murder, the police blamed the Sendero Luminoso (a leftist terrorist organization) for the killing, though a number of eyewitnesses and human rights groups claimed that the murder had been conducted by La Colina. These claims of links to La Colina and eyewitness accounts pointed to the likelihood that those eventually arrested were not the ones who had committed the attack.

In its decision in March 2005, the Court ruled that the state had violated the right to life and the right to freedom of association, and had failed to adequately investigate. The Court ordered the state to conduct and publish another investigation, discover and punish the actual killers, make a public apology, and pay compensation to the family.

Much as with the Kawas-Fernández v. Honduras case, described above, the Court was recognizing that the murder of a trade union leader and the lack of an adequate investigation constituted a violation of human rights. By doing so the Court established that labor rights and the right to advocate on their behalf as civil society—as with the case of environmental activists—was a human right for which the state was responsible.