International cooperation to address climate change is arguably the most pressing issue facing the world today. As ocean levels and global temperatures rise and extreme weather events become more common, countries around the world are increasingly working together to combat climate change and prepare for the changed realities many communities around the world are already beginning to face. And because so many of the region’s countries and their cities are next to large bodies of water, rely on glacial melt, and depend on hydropower for electricity generation, the hemisphere is particularly vulnerable to the effects of extreme weather patterns from climate change.

Of course, there are some notable international shirkers when it comes to cooperation on climate change, the United States chief among them after President Donald Trump decided to withdraw from the Paris Agreement. After Nicaragua signed on to the agreement in September 2017, the United States became the only country in the hemisphere (and, with Syria, one of only two countries in the world) that is not a part of the agreement.

The hemisphere’s near-consensus on the importance of a united front against climate change, however, doesn’t mean that the countries of the Americas perform equally well, both when it comes to other international treaties and regarding domestic performance. It should be obvious, but the act of signing the Paris Agreement doesn’t immediately turn a country into a guardian of the environment, especially on the domestic front. International consensus is important, but so are individual domestic performances.

Paris, 2015
The Paris Agreement is the world’s first agreement to set individual nation-by-nation targets, with the aim of reaching “global peaking of greenhouse gas emissions as soon as possible.” Hailed as a landmark for global cooperation, the agreement was signed by every country in the Americas except Nicaragua in 2015—though Nicaragua later signed it in October 2017. However, in 2017, President Donald Trump announced that the United States would leave the agreement. Nicaragua joined the agreement in 2017, leaving the United States alone with Syria as the planet’s only two countries not partaking.

Minamata, 2013
The objective of the Minamata Convention on Mercury (the element, not the planet) is “to protect human health and the environment from anthropogenic emissions and releases of mercury and mercury compounds.” The convention has 128 signatories, but 11 countries in the Americas haven’t signed the agreement: Bahamas, Barbados, Belize, Cuba, Dominica, Grenada, Haiti, St. Lucia, St. Vincent and the Grenadines, Suriname, and Trinidad and Tobago.

Stockholm, 2001
The Stockholm Convention on Persistent Organic Pollutants bans the use of organic compounds—traditionally used as pesticides, pharmaceuticals, and industrial chemicals—known to be harmful to human health and the environment. The convention has 152 signatories. Only two countries in the Americas haven’t joined: Haiti and the United States.

Kyoto, 1997
The predecessor to the Paris Agreement, the Kyoto Protocol’s main impact was the creation of binding commitments on capping greenhouse gas emissions for developed countries. The two developed countries in the Americas failed to join their peers in fully implementing the Kyoto Protocol; the United States never joined the agreement and Canada withdrew in 2012, eight years before the end of the treaty.

Montego Bay, 1994
The United Nations Convention on the Law of the Sea, signed in Montego Bay, Jamaica, establishes universal guidelines for territorial waters and defines the responsibilities of governments within their maritime territory, including environmental responsibilities and management of maritime resources. The convention has 157 signatories, though five countries in the Americas with maritime borders have failed either to sign or to ratify the treaty: Colombia, El Salvador, Peru, the United States, and Venezuela.

Rio de Janeiro, 1992
The objective of the Rio de Janeiro Convention on Biological Diversity is the “conservation of biological diversity, the sustainable use of its components and the fair and equitable sharing of the benefits arising out of the utilization of genetic resources, including by appropriate access to genetic resources and by appropriate transfer of relevant technologies, taking into account all rights over those resources and to technologies, and by appropriate funding.”16 The United States is the only country in the Americas not to have ratified the treaty.

London, 1972
The objective of the London Convention on the Prevention of Marine Pollution by Dumping is to “promote the effective control of all sources of marine pollution.”17 Fifteen countries with maritime borders in the Americas haven’t ratified the treaty: Belize, Colombia, Dominica, Ecuador, El Salvador, Grenada, Guyana, Honduras, Peru, St. Kitts and Nevis, St. Vincent and the Grenadines, Bahamas, Trinidad and Tobago, Uruguay, and Venezuela.

President Trump’s Decision to Withdraw from the Paris Agreement: Reactions from Across the Americas

Bahamas he Bahamian government expressed concern about the decision.

Chile he Ministry of Foreign Affairs released a statement expressing its “profound disappointment” with the decision.

Mexico resident Enrique Peña Nieto reaffirmed his country’s commitment to the agreement during a meeting with German chancellor Angela Merkel.

Peru resident Pedro Pablo Kuczynski called the decision “most worrisome” and said he hoped it would be reversed. 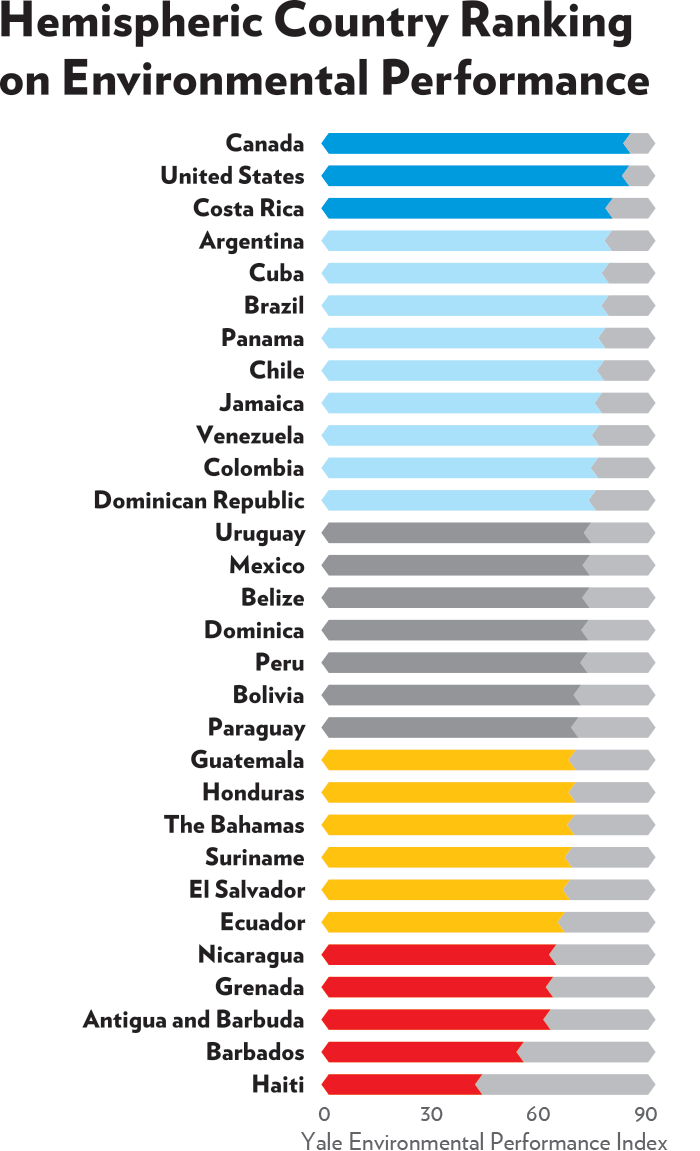 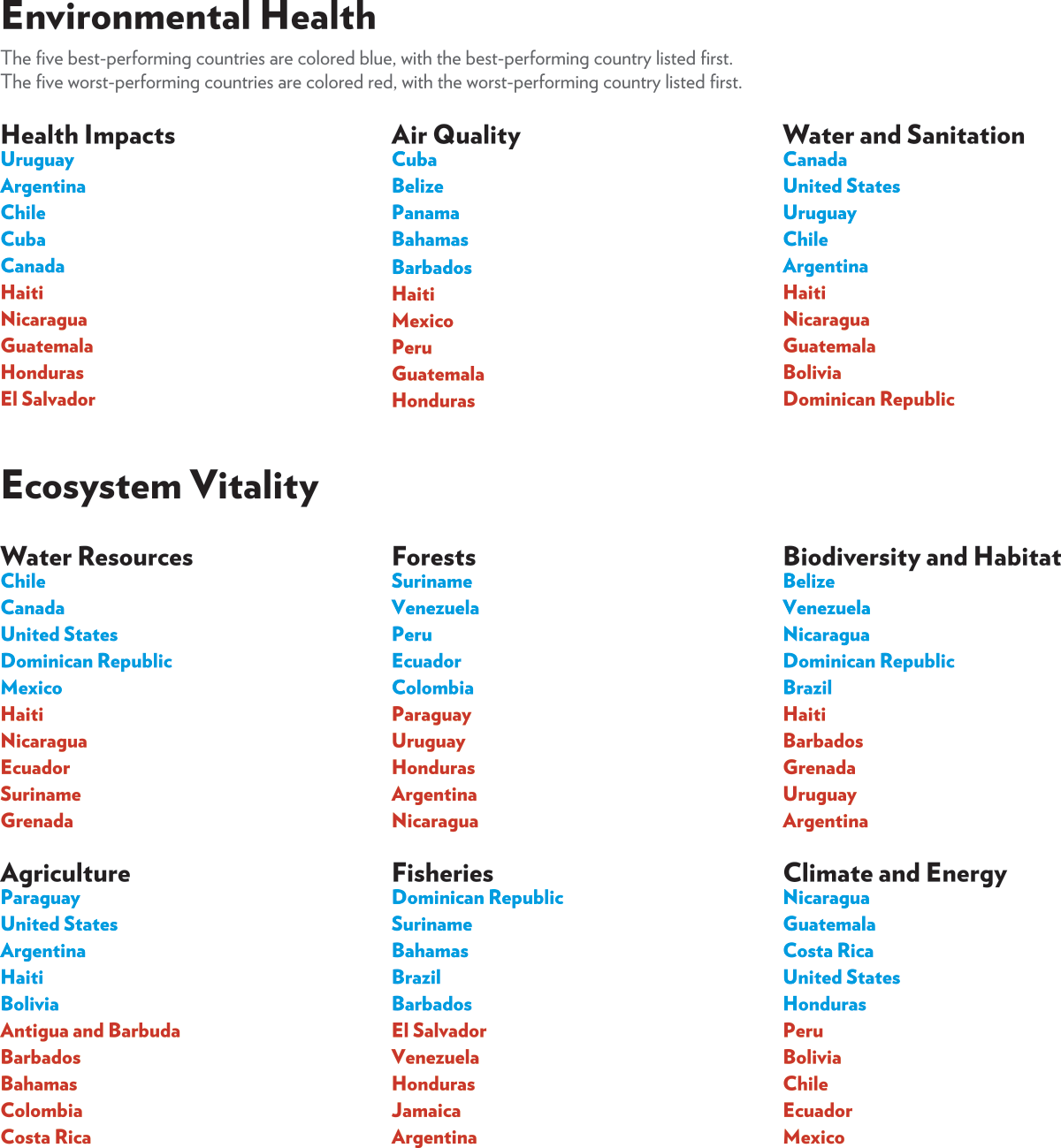 Every year, the Yale Environmental Performance Index comparatively ranks the world’s countries’ records on environmental issues by tracking how countries perform (both domestically and with regard to international obligations) in nine “issue areas”: (1) health impacts; (2) air quality; (3) water and sanitation; (4) water resources; (5) agriculture; (6) forests; (7) fisheries; (8) biodiversity and habitat; and (9) climate and energy.

In the 2016 index, performance across the Americas varies widely. Three countries in the hemisphere receive scores above 80 on the index (Canada, the United States, and Costa Rica), while five countries score worse than 65 (Nicaragua, Grenada, Antigua and Barbuda, Barbados, and Haiti).

A deeper dive into the index, however, reveals that even the best-performing countries in the hemisphere struggle in certain areas. Below is a detailed look at the five best and five worst performers in the hemisphere in each of the nine issue areas, which are weighted and combined to make up the index’s ranking. They fall into two categories—environmental health and ecosystem vitality—each of which is split into subcategories. Environmental health is made up of: health impacts, air quality, and water and sanitation. Ecosystem vitality is made up of: water resources, agriculture, forests, fisheries, biodiversity and habitat, and climate and energy.

Every country in the Americas has work to do when it comes to protecting the environment, in terms of both commitment to international treaties and domestic action. As has often been the case in human rights for countries like Bolivia, Venezuela, and Cuba, signing an international agreement or commitment on an issue does not always translate into policy or practice to meet the obligations contained in that treaty. Almost all of the worst performers listed above have signed onto treaties that touched on issues of health quality, biodiversity, water, and climate and energy. And yet, domestic policy implementation clearly has failed to match international profile. This is often the case with human rights and increasingly with protection and defense of democratic norms regionally as well.

The broader question, though, is whether the disregard for international norms and standards now shown by the current U.S. administration will weaken regional commitments even further. Though President Trump’s decision to withdraw from the Paris Agreement was an undisputed blow to multilateral collaboration, the international community appears largely committed to the agreement. Still, international consensus isn’t going to be enough. As the consequences of human-caused climate change move from the theoretical future to the tangible present, governments in the Americas and across the developing world—with the help of international organizations and developed countries—need to work to protect the environment and address the issues of climate change. But they also need to meet their international commitments domestically as well, and that deserves to be pointed out.