Tweet
Share
WhatsApp
Email
While Colombia has a strong and vibrant civil society generally, it is still one of the more dangerous countries in the world to be a human rights defender.

There is a growing global trend toward restricting civil society organizations, both domestically and on the international stage, and Latin America is no exception. Like many across the Global South, including non-democratic countries like Russia and China as well as democracies like Indonesia and Turkey, Latin American countries have been curtailing NGOs by restricting the space, protection and resources they need to achieve their missions.

One of the roles played by civil society groups is to monitor or criticize government policies and actions, making it not surprising that governments, especially thin-skinned, intolerant ones, have an incentive to control how much civil society groups can raise their voices to denounce abuse and inefficiency. Rather than prohibit problematic organizations outright, though, governments have developed more subtle forms of legal measures and policies that restrict the establishment, activities, speech, international contact, resources, and assembly of civil society. The restrictions are applied selectively to those groups most critical of the government, such as advocacy groups or human rights defenders, or those that have missions contrary to the traditional “morals” the government wishes to protect (such as LGBT groups in Russia).

The International Center for Not-for-Profit Law (ICNL), has collected data on the various categories of laws that restrict NGOs. As shown in the graph on the following page, we took the data from ICNL and coded it based on the level of severity and implications for nonprofit organizations. Solid red indicates a significant hurdle for an NGO, either legally or in practice, meaning, typically, active harassment and the use of force or threats if government is opposed to your mission; the red ring indicates a less severe, but still moderately difficult environment—including excessive regulation giving a government the ability to overtly interfere and harass a “problematic” NGO; and blue shows minimal impediments on organizations in that country.

According to the ICNL, those countries in Latin America with the strongest NGO barriers are Ecuador, Nicaragua and Venezuela—all members of the ALBA, which has become known for restrictions on its citizens’ human rights—as well as Colombia, a country just now coming out of decades of armed conflict. The ratings show that these countries have especially restrictive policies curtailing NGO activities, freedom of speech and freedom of assembly. Though Venezuela, Nicaragua and Ecuador are competitive authoritarian systems (more than out-and-out autocracies) and Colombia is a democracy (albeit with some limitations), these restrictions are more similar to those in authoritarian or communist countries such as China and Russia than to other democracies.

Both Ecuador and Venezuela have used excessive financial penalties and criminal proceedings to harass and shut down organizations critical of their actions and policies.

In Colombia, decades of fighting and civil war have led to an environment in which human rights groups, especially those that question the government’s heavy-handed tactics, face significant barriers to formation and harassment, from both inside and outside the government. Thus, while Colombia has a strong and vibrant civil society generally, it is still one of the more dangerous countries in the world to be a human rights defender.

It is no surprise that the ALBA countries, given their interest in sustaining a monopoly over who gets to speak on behalf of “the people,” have such excessive policies.

But why do countries with more moderate governments, ranging from Honduras to Peru, which vote or speak up, at least on an international stage, to protect human rights, also have restrictions on NGOs, freedom of speech and freedom of assembly? As in Colombia, could restrictions in these countries be a legacy of the violence and armed conflict that have historically allowed governments a freer hand in curtailing groups from speaking up for, and protecting, the rights of those fighting the government? Civil society groups have historically played an important role, intrinsic to their very nature, in democracies around the world by providing services and support—effectively a safety net for the most vulnerable—often times in areas or times where the government was absent. This role can be seen as threatening, especially if organizations can use these popular bases of support to question government actions.

With the erosion of Latin America’s populist left, as well as the final end to Colombia’s decades-long conflict, there may be hope for the region to buck the global trend toward restricting civil society organization and recognize instead the various crucial roles NGOs can play, whether in providing needed services in areas where the government cannot, in protecting human rights, or in holding a government accountable for its actions, even if the government does not agree with their views.

Governments’ opposition to greater respect for human rights such as freedom of association and expression often translates into domestic regulation of those internationally defined rights. In the region, Ecuador and Venezuela track most closely with China, Indonesia, Russia, and Turkey—though are not that far out of step with Colombia, Honduras, Panama, and Peru. 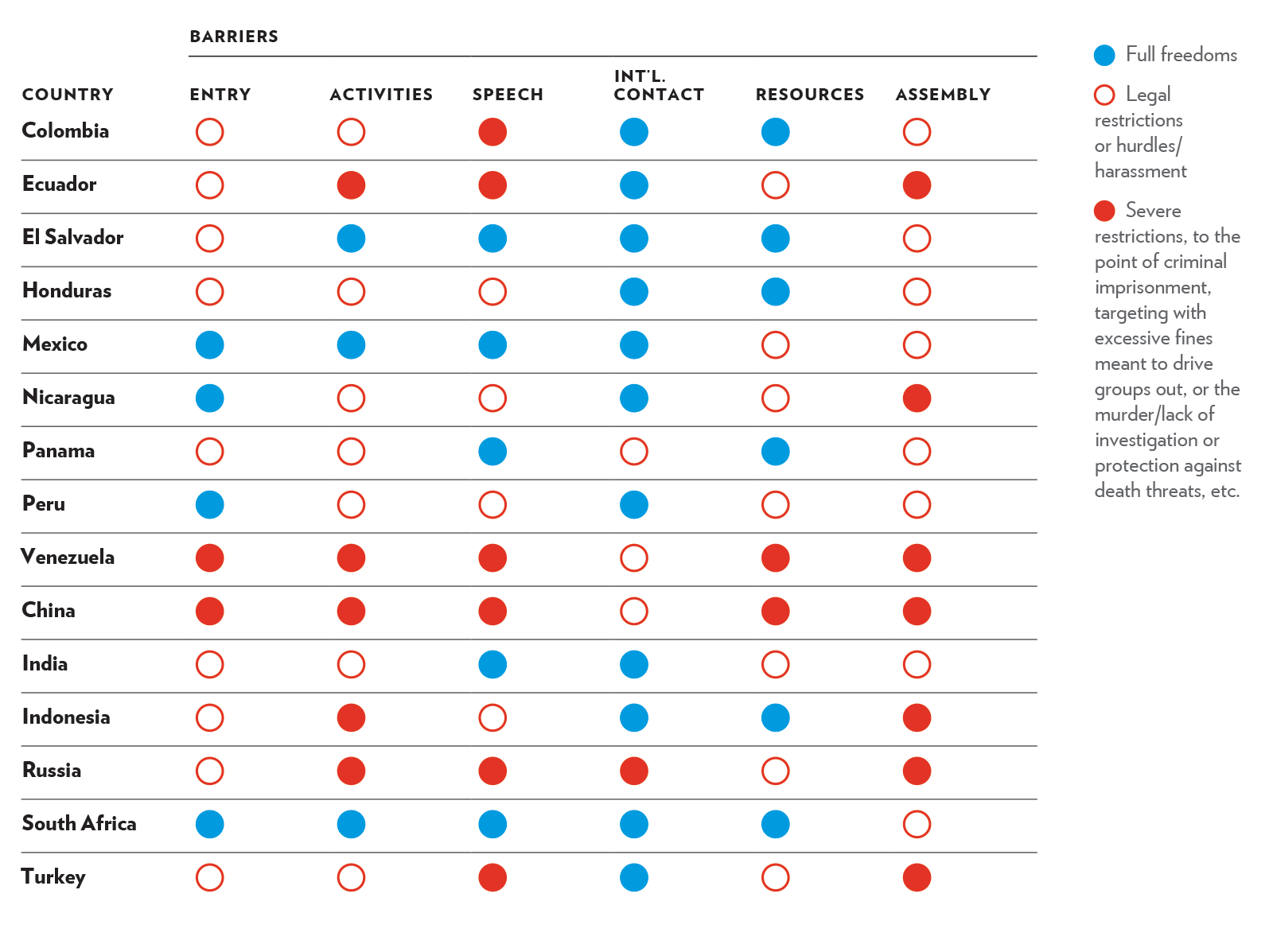