Latin America has been at the forefront of tackling corruption—at least in terms of laws on the books. In 1996, the entire region (except Cuba) signed an OAS treaty, the Inter-American Convention against Corruption, that was the first multilateral convention to focus exclusively on corruption, both domestic and international. In addition, a number of countries in the hemisphere are party to the Organisation for Economic Co-operation and Development (OECD) Anti-Bribery Convention: Argentina, Brazil, Chile, Colombia, and Mexico. But there’s a difference between signing onto an agreement and complying—though a growing number of countries are refusing to do even the former.

The OAS treaty seeks to both encourage the development of domestic mechanisms to fight corruption and coordinate between countries on anti-corruption measures to make anti-corruption laws and investigations more effective. It obligates countries to implement the treaty obligations into domestic law and has a peer-review enforcement body, the Mechanism for Follow-up on the Implementation of the Inter-American Convention against Corruption, or MESICIC. The peer committee conducts periodic reviews of all members and issues a hemispheric report on the state of anti-corruption efforts regionally.

MESICIC has had more success than might be expected for a body made up of peers in a hemisphere that is traditionally averse to self-criticism. But by focusing on technical, legal, and concrete ways to improve anti-corruption measures, MESICIC has been able to steer clear of politics and make recommendations that have been less controversial and easier for countries to comply with. The collaborative and constructive nature of the peer process avoids the heavy-handed evaluation or the finger-wagging dynamics that often make governments defensive and such processes ineffective.

In addition to the region-wide OAS treaty, the five largest regional economies, Argentina, Brazil, Chile, Colombia, and Mexico, have also committed to the OECD Anti-Bribery Convention. The treaty focuses exclusively on cross-border or foreign corruption and bribery of public officials by businesses.

The most recent OECD country reports call out Argentina and Brazil. The report argues that Argentina is “seriously non-compliant with key articles” and has widespread delays, raising concerns about judicial independence. The report, though, is backward-looking, to the practices of the notoriously corrupt government of Cristina Fernández de Kirchner. Today the question is whether the government of current president Mauricio Macri will prove more transparent and accountable.
More criticized by the OECD reports is Brazil, the 7th-largest economy in the world. According to the report, the South American giant has brought forward only five investigations of foreign bribery in the 14 years since committing to the treaty. The 2014 report also all but predicted the Petrobras scandal, raising a specific concern that economic considerations for national “champions” were influencing investigation decisions.

According to the same report, even Chile, considered one of the least corrupt countries in the region, was not sufficiently investigating bribery allegations.
On a national level, the region has experienced a wave of freedom of information legislation, codifying a right recognized in the Inter-American Convention on Human Rights and the Declaration of Chapultepec. Before 2000, there was only one country (Colombia) with a law explicitly protecting this right. Today that right has either been protected by new legislation or recognized as one of the rights protected constitutionally in each country around the region. The exception, of course, is Cuba.

But while the right may be recognized and “on the books” in each country this does not mean that each government lives up to its promises in an effective or timely matter. According to the World Justice Project’s Open Government Index, 75 percent, of the people who requested information in Venezuela received the information; in Mexico that number was 79 percent; and in Peru 67 percent. Surprisingly, Colombia did the worst according to the index, with only 56 percent of those polled receiving the information they requested.

The quality of information also varied across the region. With the exception of Colombia, over half of all recipients in all the countries surveyed reported receiving the information actually requested, with that number reaching 83 and 84 percent in Ecuador and Mexico, respectively. 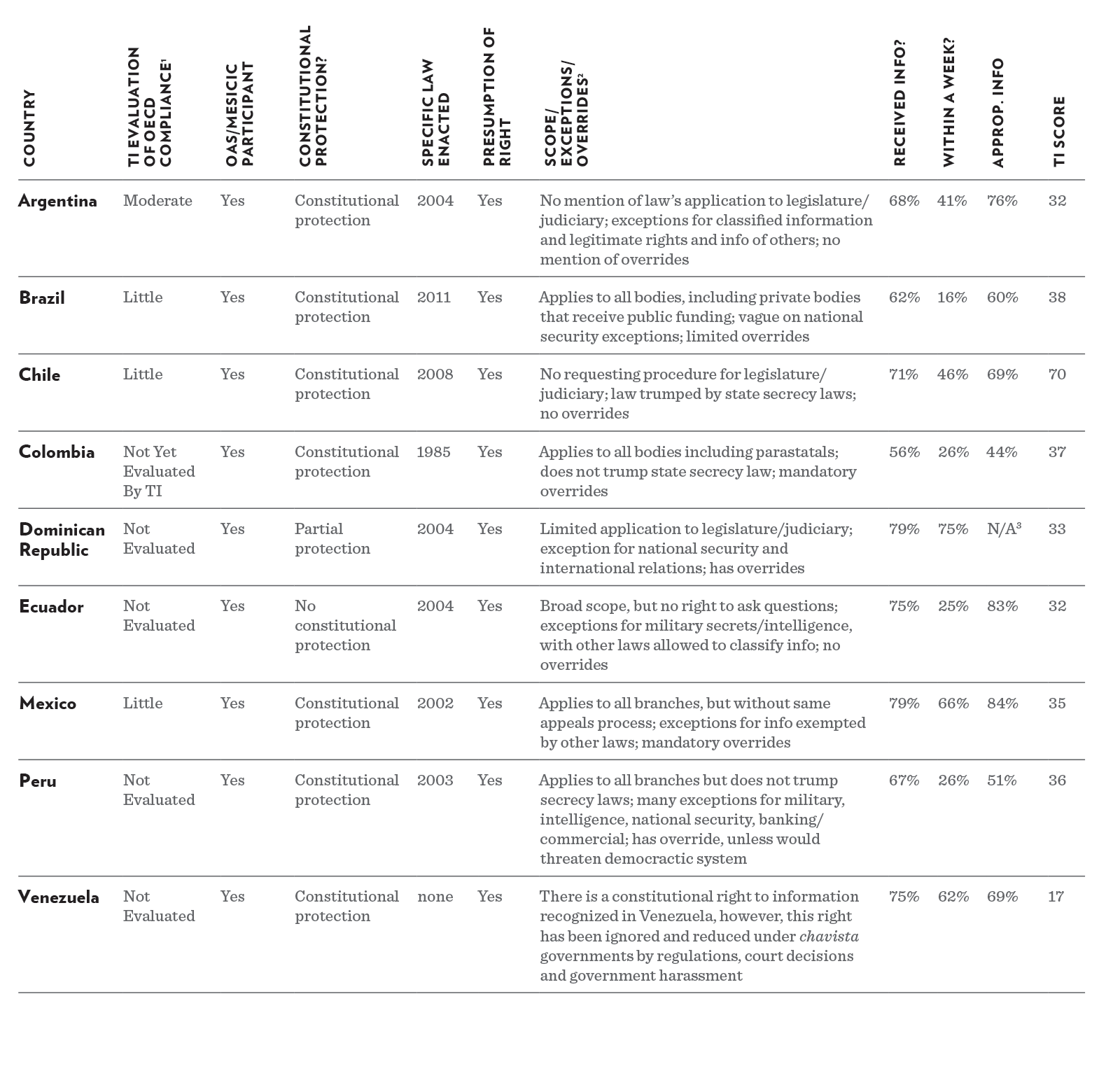