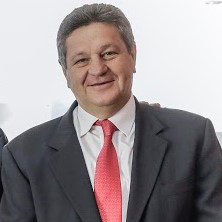 Tomislav Kuljis is the Founder and President of Hipermaxi S.A., the largest supermarket and retail company in Bolivia.  Tomislav, who received his MBA from the University of Miami in 1985, is also involved in a number of construction, banking, beef, and delivery businesses in Latin America.  He was the former President of the Bolivian Institute of Foreign Trade and was Honorary Consul of Mexico in Santa Cruz, Bolivia from 1998 to 2009.