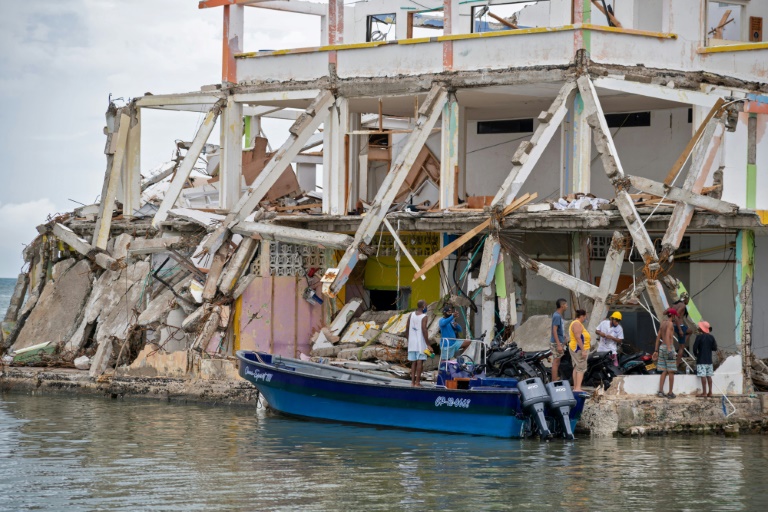 The impacts left by Hurricane Iota on the islands of San Andrés and Providencia has added to the sense of dread and abandonment by the central government long felt by the residents of the archipelago. Although the government’s response to the crisis has been swift, there is a sense that more could have been done to mitigate the risks from hurricanes and extreme weather caused by climate change.

2020 has been bad for all Colombians, but it has been really bad for people in the country’s largest archipelago: San Andrés, Providencia, and Santa Catalina. Here, the social and economic crisis left by COVID-19 has been compounded with the aftermath of Iota, a Category 5 hurricane, which struck the islands on November 15 provoking a humanitarian and environmental crisis worsened by the government’s poor preparation for extreme weather events.

San Andrés and Providencia have been historically secluded from mainland Colombia due to several reasons including their isolated geographic position (which is closer to Nicaragua than mainland Colombia), the demographic characteristics of the islands (where Raizales are the predominant ethnic group), as well as language (where the main local language is Creole, as opposed to Spanish). These differences have made the archipelago geographically, culturally, and politically distant from mainland Colombia.

Moreover, the central government has paid attention to the region only as a result of major events, such as the Hague territorial dispute with Nicaragua over sovereignty of the islands, significant cases of corruption involving local officials, and natural disasters such as Iota. The government has made a point of exercising its sovereignty over the island when it is politically convenient, as it was on August 8th, 2018, when President Duque spent his first full day as President in the archipelago.

Two weeks before Hurricane Iota, Hurricane Eta, which formed in the Atlantic Ocean, struck Nicaragua and its path came close to San Andrés and Providencia. Although no major damages were reported from Eta, it was a warning; hurricanes were getting close and becoming more dangerous. Never in the country’s recorded history had a hurricane reached the archipelago. It was thought to be south enough to avoid them. They were wrong.

The government argued there was nothing they could do to respond to Iota differently, as the hurricane’s trajectory was difficult to predict. This is simply untrue. One week before the hurricane formed, international meteorological services warned about a storm forming in the south of the Caribbean, south of Jamaica, with a trajectory towards Central America, and with the potential threat of evolving into a significant hurricane. The government could have put on an evacuation strategy to assist some of the most vulnerable residents out of the storm’s path or it could have ceased air traffic from the mainland, to avoid bringing in more tourists to the islands, but it did neither. From a long-term perspective, the government could have spent years building shelters, improving the building code for the islands, or providing adequate hospital infrastructure, but that wasn’t the case either.

The aftermath of the hurricane has been brutal. An estimated 98 percent of Providencia’s infrastructure suffered some kind of damage and Santa Catalina, the nearby island, lost the only pedestrian connection to Providencia. Many buildings and road infrastructure in San Andrés also suffered damages, yet they are minor compared to the scale of destruction in Providencia. Although difficult to quantify, the hurricane also left an important environmental toll as the storm caused significant damages to the archipelago’s endemic ecosystem by falling trees, damaging coral reefs, and hurting the mangrove forests on the islands.

The storm couldn’t come at a worse time for the archipelago’s economy, which is heavily dependent on tourism and artisanal fishing. Fishing had declined substantially since 2012 when the International Court of Justice (ICJ) ruled in favor of the Nicaraguan government, stating that surrounding waters to the archipelago were in fact, Nicaraguan. Tourism, however, remained the economic lifeline of the islands, yet it was badly hurt by the COVID-19 lockdowns. Reportedly, the archipelago lost almost 90 percent of its tourism income—the largest decrease in tourism revenue in the country—resulting in a 40 percent reduction in tourism-related jobs.

As mobility restrictions eased, tourists arrived once again to the archipelago in early September, and official data reported an occupation rate of 20 percent in hotel rooms in San Andres by late October which signaled that recovery was ahead. Hurricane Iota erased all signs of hope for the islands’ economic recovery and they are now almost exclusively dependent on government transfers and assistance, which many islanders consider to be insufficient. An increase in unemployment is expected as touristic infrastructure such as hotels have been damaged and will not be able to receive visiting tourists during the holiday season, something already considered to be a faint hope after months of lockdown.

The human toll of the crisis is significant as many islanders are now living in temporary shelters after they were evacuated from badly affected areas. Thousands have been left homeless, unconnected, and economically vulnerable. Moreover, as mainland Colombians, such as the military and volunteers from the Red Cross arrived on the island carrying aid supplies for the islanders, COVID-19 cases are bound to rise. In fact, by the end of November, there was already a shortage of medical supplies to aid the islanders, which could lead to a health crisis if not acted upon. Providencia’s badly damaged hospital has been temporarily replaced with a field hospital to tend to the 1,700 residents on the island.

Even as the government has announced that Providencia and Santa Catalina’s reconstruction will be complete within 100 days, and the private sector and international partners have pledged funds to aid in the recovery, efforts are likely to fall short of expectations. In addition to this, as the news cycle withers and the holiday season begins, the islands will fall off the list of the government’s priorities and state abandonment will again doom the island’s prospects for recovery.

Real investment must be directed to the archipelago to build solid foundations for an economy that can best take advantage of the archipelago’s geography and its culture, one that also fully integrates islanders into the planning and recovery efforts instead, and where the islands’ ownership of resources remains with the locals (as opposed to hotel companies eager to own real estate in the islands). As a result, the islands should slowly become integrated into the mainland’s economy. It is not enough for central government to attend to the current crises affecting the islands, it must become heavily invested in the region’s long-term sustainable development.

The outlook for islanders is grim. Despite the government’s promises, it seems unlikely that it has enough resources and political will to see through the massive recovery efforts needed to rebuild the islands, make them resilient to climate change, and promote sustainability. As the government’s attention wanes, the communities’ patience is likely to crumble. As the rest of the country suffers from the COVID-related economic turmoil and security concerns, the Archipelago of San Andrés, Providencia, and Santa Catalina is unlikely to set a course for lasting prosperity following the effects of Hurricane Iota.

Sergio Guzmán is the Director of Colombia Risk Analysis, a political risk consulting firm based in Bogotá. Follow him on Twitter @SergioGuzmanE and @ColombiaRisk

Juan Diego Ávila is a Research Intern at Colombia Risk Analysis and he is currently an undergraduate student at Universidad de Los Andes. Follow him on Twitter @juandiavil

All opinions and content are solely the opinion of the authors and do not represent the viewpoints of Global Americans.