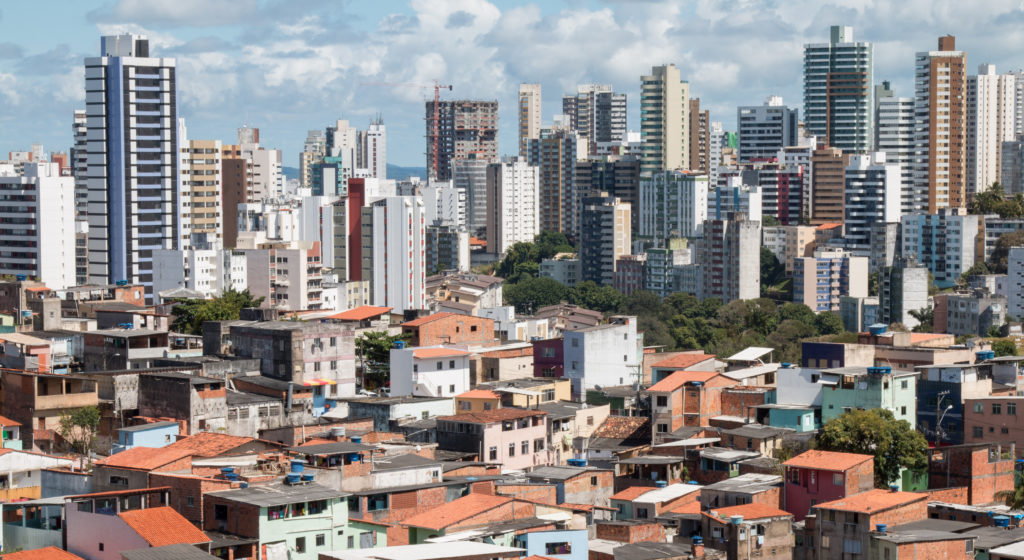 Throughout history, cities have been the epicenter of infectious disease, and the COVID-19 pandemic has not been an exception. Latin America is the latest hotspot of the pandemic, forcing cities across the region to design social distancing strategies to reduce the spread of the infectious disease. However, this has become a challenging task, with socio-economic inequalities more evident.

Latin American cities are one of the most unequal places in the world, to the extent that the image of favelas next to luxurious residential towers in Brazil has become the textbook definition of inequality. With 90 percent of Latin Americans predicted to live in cities by 2050, it is necessary to plan these urban spaces to equitably accommodate citizens for the inevitable future. How cities decide to respond to the COVID-19 pandemic is imperative for the future of Latin American cities and will impact generations to come.

The French philosopher Henri Lefebvre introduced the idea of “the right to the city,” in which he argued that every citizen should be included in shaping the urban environment. The production of space should not be driven by property owners’ needs but by the people who inhabit the space. Unfortunately, this is not reality. In a market-centric society, this “right” is reserved for a small privileged group.

When property is valued more than human life, it instigates inequality, resulting in the marginalized displaced to peripheries and forced into hazardous living conditions. COVID-19 has revealed this by showing the two tales of the Latin American city: the excluded and the included. In this case, the excluded live in the periphery and lack access to necessities such as public transportation, clean water, healthcare, among other things. In comparison, the included can enjoy the security and comfort of their homes while isolated from others. When planning for the post-COVID-19 city, the focus should not just be on preparing for the next pandemic, but also addressing societal issues that have been ignored for far too long.

To mitigate the spread of the coronavirus, mayors, and urban planners adapted cities to facilitate social distancing; and consequently, designed cities to serve humans. For instance, in Bogotá, Colombia, the government replaced 35km of traffic lanes with new emergency bike lanes to ease crowding in public transport. In addition, the Colombian capital closed 117km of streets to cars to encourage citizens to walk and cycle during the lockdown. This not only happened in Bogotá but also in Mexico City, Mexico—which introduced a similar bike lane expansion project.

Mexico City has made it a goal to build up to 131 km of bike lanes as a safer travel option during the pandemic for those who depend on public transportation. Cycling should be encouraged in cities as it not only helps to adhere to social distancing orders but offers many other benefits, such as promoting citizens’ health. On top of that, pedestrianizing streets and expanding sidewalks allows urban dwellers to reclaim the streets that were once dominated by cars. These projects allow cities to transform in a fashion that ensures pedestrians and cyclists are given center stage to navigate its streets.

Instead of having these interventions span until the end of the pandemic, why not keep them for the long-term? As cities slowly open up, Latin America has the unique opportunity to resume without the same levels of congestion. It is a fact that Latin American cities are some of the most congested in the world. In Bogotá, drivers lose up to 191 hours a year stuck in traffic, making the Colombian capital the most congested city in the world. The lack of adequate public transportation in the past has contributed to the widespread use of motor vehicles in Latin American cities that we see today. Due to this, it has generated immense mobility challenges and also aggravated class divisions.

For example, in São Paulo, mass transit accounts for 58 percent of all commuting trips in the city and is mostly completed by low-income workers. Even though public transportation ridership has decreased in the city due to fear of contagion, this essential infrastructure should be revised to accommodate and encourage citizen usage. Fortunately, São Paulo has recognized this reality and increased bus fleets in some lines to avoid crowds and increased the frequency of their sanitization protocols in both stations and vehicles. Such a case highlights the possibility of investing in public transportation infrastructure and shows how important it is to promote sustainable and equitable growth.

Making city cycling safer, creating pedestrianized streets, and expanding public transportation, are demands that have been made by urban dwellers for years. Even before the coronavirus reached Latin America, urban citizens have long demanded stronger plans to tackle climate change.

During the lockdown, cities worldwide—including in Latin America—saw a drastic drop in carbon dioxide emissions. By seizing this moment, cities can reduce emissions in the long-term by further encouraging walking, cycling, and public transportation usage. This is vital for Latin American cities as many suffer from high levels of pollution—around 25 years ago, Mexico City was considered the most polluted city in the world. COVID-19 lockdowns are demonstrating that a future with fewer cars on the road—and therefore reduced carbon dioxide emissions—is not impossible. By planning the cities around pedestrians instead of motor vehicles, we can promote a more sustainable way of living.

A push for equitable cities

Nevertheless, it is crucial to keep in mind for whom these urban interventions are catered for. Even though these projects aim to make cities sustainable, climate change movements have perpetually excluded marginalized populations. It is vital to note where these projects are taking place and whether they contribute to the exclusion of Afro and Indigenous communities in Latin America. In many cases, public transportation has been an instigator for gentrification, resulting in higher rates of displacement of lower-income citizens. Careful examination of the implementation of these projects is needed to ensure that they will be accessible to all in the long-term.

To advocate for the “right to the city,” it is essential to make sure that all citizens have the “right” and means to shape their post-COVID-19 communities. This can be realized by allowing social participation in the administration of the city. Those who will be most affected by these mobility projects should be in the room voicing their concerns and needs to prioritize the social, rather than commercial, function of urban space. The COVID-19 pandemic can be a force to instigate change in Latin America. Only if we facilitate social participation will we have the opportunity to build post-COVID-19 cities for a more equitable future.