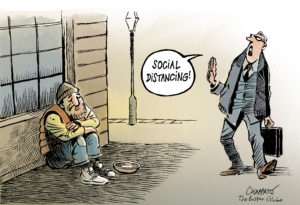 The COVID-19 pandemic has devastated the world. The virus has paralyzed countries and slowed down the global economy. While the outbreak seems to have mildly affected countries like Uruguay, others like Brazil, Ecuador and the United States have seen a surge in cases and COVID-19 related deaths. But a health crisis isn’t the only consequence of the pandemic, in countries across the hemisphere the outbreak has also exacerbated inequality.

According to World Bank forecasts, the pandemic is likely to cause the first increase in global poverty since 1998, with estimates suggesting it will push 49 million people into extreme poverty in 2020. At risk, is Latin America’s informal economy, composed of nearly 140 million Latin Americans—or about 55 percent of the working population. With strict social distancing and quarantine measures enforced across the region, many informal workers are without work, money, and even homes. Across the region, low income communities have been the most affected by the virus. Whether it be a lack of access to basic services like sewage systems or drinking water, saturated public hospitals, or inflated costs of medication and mortuary services, households that live paycheck-to-paycheck are finding it extremely difficult to adapt to quarantine.

In Colombia, inequality is visualized by red clothes hanging out of windows, a signal to neighbors by needy families that they are in need of food. The movement began in the municipality of Soacha, and encouraged by Mayor Juan Carlos Saldarriaga who’s said that his constituents are more likely to “end up dying of hunger than from the coronavirus.” While many, including Saldarriaga, view the “red-flag movement” as an act of solidarity among neighbors, others view the act as a symbol of a tattered social safety net and government inefficiency. According to former Bogotá Mayor Clara López, “the red flags in the poor barrios are like red cards for the ways policies have been put into place during the pandemic.”