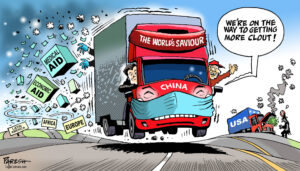 The global perception of China amid the COVID-19 pandemic has changed drastically from the beginning of the crisis to now. This isn’t a coincidence. Over the past couple of months, the Chinese government has worked hard to deflect blame for the outbreak, relying heavily on its state-owned media apparatus and medical diplomacy to control its narrative.

China’s Communist Party has been hard at work shaping the conversation on the coronavirus, shifting the blame for the outbreak away from China. According to a study by the Cyber Policy Center at Stanford’s Freeman Spogli Institute, compared to U.S. media, Chinese state-owned media outlets’ English-language content uses positive keywords to counterbalance negative topics. For example, when covering the death of Doctor Li Wenliang—one of the first Chinese doctors to warn about COVID-19, but who was later forced by police to sign a letter stating he had made “false comments”—Chinese media used words like “condolences” and “deeply mourn,” compared to U.S. media which used “silenced” and “threatened” in social media posts related to the story.

Taking advantage of the U.S.’ inward turn as a response to its own COVID-19 crisis, China is using its coronavirus outreach to expand its influence in Latin America. From Argentina to Peru to Mexico and Brazil, governments are accepting its extensive donations of medical equipment and diagnostic technologies—once again changing its narrative from originator of the virus to international savior. However, as many Latin American countries look anxiously to China for signs of economic relief, given its own economic slowdown, that aid may not be the panacea the region is hoping for.