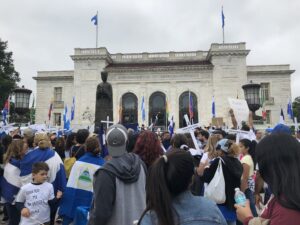 Currently, the position is being held by Uruguay’s Luis Almagro. During his five-year term starting in 2015, Almagro has tackled issues such as Venezuela’s ongoing humanitarian, migration  and economic crises; the political crisis in Nicaragua; and the observance of numerous elections across the region, amongst other things.

Secretary General Almagro is seeking re-election and has gotten the endorsement from the United States and other allied countries.  Hewill be running against two other candidates: Ambassador Hugo de Zela Martínez, Permanent Representative of Peru to the OAS; and María Fernanda Espinosa, former President of the United Nations General Assembly for the 73rd session.

Below you can read more on each candidate’s background.

On two occasions, from 1989 to 1994 and 2011 to 2015, Ambassador Martínez served as chief of staff of the General Secretariat of the OAS. Ambassador Martínez is a career diplomat with 42 years of service. He has also served as permanent representative to the OAS, Ambassador to Brazil and Argentina, Peru’s national coordinator in the Rio Group, and a member of Peru’s delegation in border negotiations with Ecuador from 1997 to 1998.

If elected, he would be the first Peruvian to serve as Secretary General.

Former Ecuadorian Foreign Minister María Fernanda Espinosa was nominated as a candidate for OAS Secretary General by Antigua and Barbuda, St. Vincent and the Grenadines, among other Caribbean nations—Argentina is also speculated to support Espinosa during the March election. Espinosa has not received the endorsement of the Ecuadorian government, for it has already expressed its support for candidate Luis Almagro.

In 2018, Espinosa was elected as the President of the 73rd session of the United Nations General Assembly. She was the fourth woman and the first Latin American to hold that title.

Espinosa has served as Ecuador’s Minister of Foreign Affairs twice, once under current President Lenín Moreno from May 2017 to June 2018 and prior to that, under former President Rafael Correa from January 2007 to December 2007. In 2012 she was appointed Minister of National Defense and stayed in that capacity until her resignation in 2014.

If elected, she would be the first woman to hold the title of Secretary General.

Luis Almagro was elected OAS Secretary General on March 18, 2015. During his time as head of the OAS, Almagro has prioritized the defense of democracy and human rights. He was the first Secretary General to invoke Article 20 of the Inter-American Democratic Charter over the situations in Venezuela and Nicaragua, which states that any member state can request an immediate convocation of the Permanent Council to assess a situation and undertake the “necessary diplomatic initiatives” to restore democracy.

In late 2018, Almagro announced his intentions to run for the position again, following the endorsement from the United States. Prior to his work at the OAS, Almagro was Uruguay’s Foreign Minister under former President José Mujíca, from 2010 to 2015. He also served as Uruguay’s Ambassador to China, advisor to then Minister José Mujíca, and Director of the International Affairs Unit of the Ministry of Livestock, Agriculture, and Fisheries in 2005.

In 1998 he was appointed Representative of Uruguay for the United Nations Educational, Scientific and Cultural Organization. Almagro also served as the National Coordinator for the Group of Temperate Southern Hemispheric Countries on the Environment from 1997 to 1998. Prior to that he served as Chargé d’Affaires at the Embassy of Uruguay in Iran.