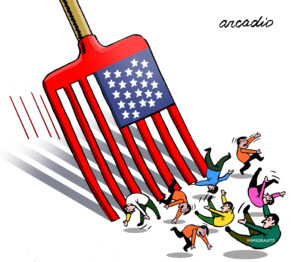 As one of President Donald Trump’s longest-tenured and most trusted aides, Senior Policy Advisor Stephen Miller is the singular force behind the administration’s immigration agenda. With this power, Miller has been able to shakeup the leadership of the Department of Homeland Security—replacing one immigration hard-liner for another—and pushing for harsher anti-immigration policies such as the “zero tolerance” policy and the “public charge” rule.

As NBC reported last July, Miller’s “mantra has persistently been presenting aliens with multiple unsolvable dilemmas to impact their calculus for choosing to make the arduous journey to begin with.” But even as he pushes for harsher immigration policy, migrants remain undeterred. According to figures released by the United States Customs and Border Protection earlier this month, U.S. immigration authorities have apprehended 76,020 minors traveling without their parents this fiscal year—52 percent more than last year.

Now after some time out of the spotlight, Miller is caught in the middle of a scandal following the release of a series of leaked emails between him and Breitbart editors that show he promoted white nationalist literature and pushed racist immigration stories. The emails, published by Southern Poverty Law Center’s HateWatch, date back to 2015 to 2016—before and during Miller’s time working at the Trump campaign.

According to Hatewatch, 80 percent of the more than 900 emails reviewed were related to or appear on threads connected to race and immigration. When discussing crime, Miller focused on crimes committed by nonwhites, and when discussing immigration, he spoke on severely limiting or ending nonwhite immigration to the United States. As Katie McHugh, the former editor for Breitbart who leaked the emails said, “What Stephen Miller sent to me in those emails has become policy at the Trump administration.”