As Nicolás Maduro hunkers against international criticism and an opposition boycott of his snap May election, the traditional defenders of liberal democracy in Latin America are raising their voices.  But few are doing much else.

On February 14th, Peruvian President Pedro Pablo Kuczynski uninvited Maduro from April’s Summit of the Americas in Lima. The Grupo de Lima, which has led regional opposition to Maduro’s brash consolidation of power, and the European Union both vowed not to respect the results of the election. And on Friday, the Organization of American States (OAS), which has so far been ineffective in its efforts to halt or even slow down Venezuela’s downward spiral, held a special session during which it approved a resolution condemning Maduro’s plan to call elections months before they were originally scheduled.

In the typically mild language of OAS resolutions, the body calls on Venezuela to “reconsider” the May date in order to guarantee “free, fair, transparent, legitimate and credible” elections with the participation of all political parties, international observers, and an impartial National Electoral Council.

The vote count broke down predictably, with like-minded governments and Venezuela’s Petrocaribe allies mostly either voting against the resolution or abstaining. In fact, the 19 votes in favor were the same number that voted for a resolution at the OAS General Assembly (though in the most recent case Belize abstained and Barbados voted in favor.) 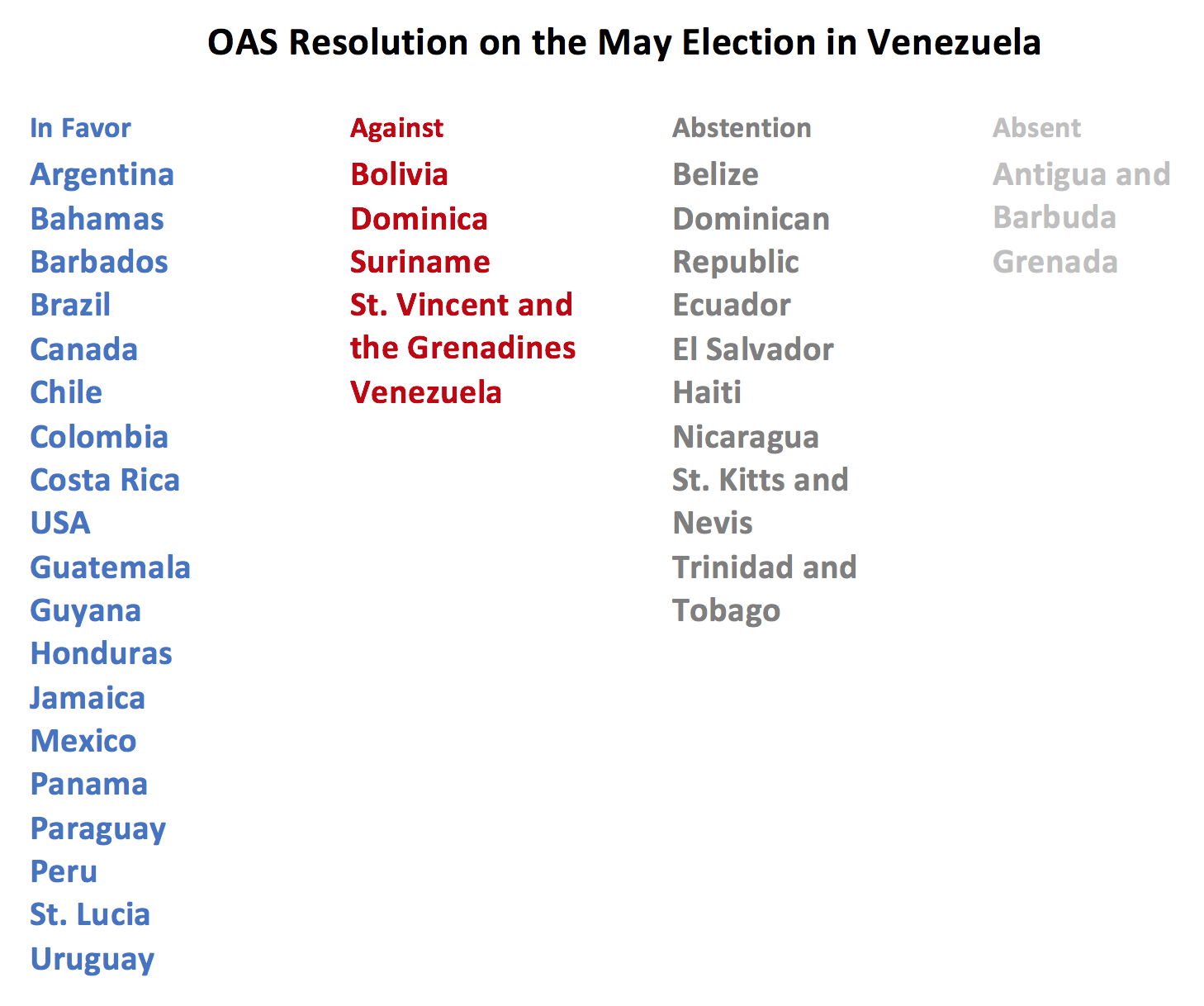 Though the OAS resolution is better than complete inaction by the body, Maduro’s actions over the last couple of years show that it’s not going to make a difference. As long as Venezuela can count on its traditional regional and global allies to continue their diplomatic and financial support, the Maduro regime will continue to manipulate the remaining charade of democracy to consolidate power over the state and perpetuate itself in power.

At this point, the most viable options for thwarting Maduro come from within Venezuela. As the economic situation in the country continues to worsen, a unified, focused opposition—admittedly a difficult proposition given both the past strategic blunders of the opposition and the regime’s systematic institutional and physical repression—or the abandonment of Maduro by his most important allies are the best hopes for a return to a semblance of normalcy in Venezuela.

Even though Maduro has done everything in his power to rig the elections in his favor, a modicum of hope remains despite the opposition boycott. This week, prominent opposition member Henri Falcon broke from the rest of the opposition and announced that he’d run against Maduro. The rest of the opposition remains caught on the horns of dilemma: refuse to participate in what will clearly be fraudulent elections and remove themselves—again—from the process (as they have done on and off since 2005), or participate and risk legitimating an electoral charade. Both options have obvious flaws, and the former denies Venezuelan voters their right to cast ballots for a candidate other than Maduro.

Polls show that if there is a viable second candidate and the elections are free and fair, the race might actually be competitive. Those are two big ifs.

Update: On March 1st, the Venezuelan government postponed the election until May 20th, though the opposition has still vowed to boycott the vote. This piece has been updated to reflect that change.