After almost two decades of negotiations, Mercosur and the European Union (EU) are closer than ever before to concluding an historical and important free trade agreement.   For the EU, the conclusion of negotiations would be a key sign of consensus and progress after Brexit. For the Mercosur nations, an agreement would be a sign to the world that the Southern Cone customs union is still alive and kicking.

Mercosur was founded in 1991 by Argentina, Brazil, Paraguay and Uruguay with the signing of the Treaty of Asunción. Venezuela joined the bloc in July 2012 and Bolivia has been in the process of becoming a full member since December 2012. Chile, Colombia, Ecuador and Peru have remained associate states. Today, Mercosur is one of the most important trading markets in the region, with more than 275 million inhabitants and a GDP of $3.5 trillion (making it the fifth largest economy in the world). On the other side, the EU, if treated as a single country, is the second largest economy in the world.

The next weeks are crucial for the success of the negotiations. After two weeks of talks in Brussels, which concluded a few days ago, the two negotiating teams will continue the discussions in Asunción, Paraguay, throughout the week of February 19th. And although there is still work to be done, it seems that the negotiators are closer to reaching an agreement in key sections, including the contentious agricultural chapter.  During the talks in Brussels the EU signaled that it could open up its market to more beef coming from Mercosur countries, an issue for the Southern Cone economies. EU negotiators have offered to raise beef imports from 70,000 tons to 99,000 tons. Mercosur originally asked Europe for 400,000 tons and its second—adjusted—demand was for 150,000 tons (See Figure 1).

Figure 1: A timeline of negotiations on beef market access 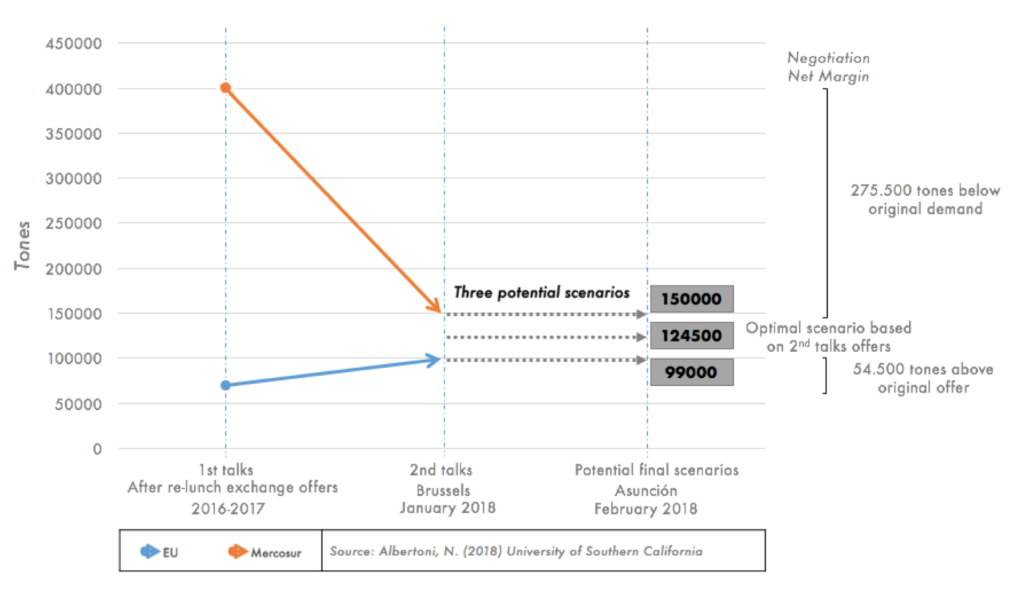 The EU’s main demands—as expected—are market access for cars and car parts, as well as dairy products. Brussels is also interested in access for European companies to public tenders and maritime services, as well as guaranteeing protection of food and drink names (e.g. protected designation of origin such as champagne, which in the EU can only be used for products made in particular geographic areas).

The agreement’s economic and political relevance

Apart from the much-needed boost of unity that the FTA would provide, Mercosur countries have economic reasons to conclude this agreement. Although the EU holds bilateral partnership and cooperation agreements with the founding members of Mercosur, all of them—with the exception of Paraguay—no longer benefit from the Generalized Scheme of Preferences (GSP) due to their classification as high middle-income countries (effective January 1, 2014). Moreover, the EU is an important market for Mercosur; trade between blocs has been balanced with almost no trade deficit (Figure 2).

Figure 2: Trade relations between Mercosur and the EU 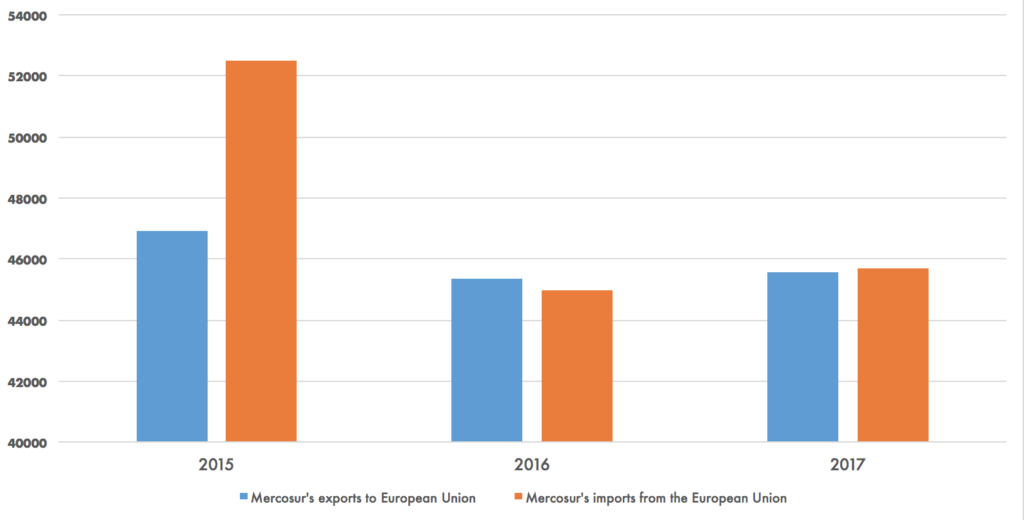 Source: ITC calculations based on UN COMTRADE statistics until January, 2017 (US Dollars in millions).

On the political side of the negotiation process, in a context in which free trade negotiations are in process of stagnation and anti-trade rhetoric continues to rise, the conclusion of this agreement between a developed and a developing region would be a strong step forward for north-south trade relations.

It took two decades for negotiations to reach this point. Currently, trade relations between both blocs are carried under the inter-regional Framework Cooperation Agreement, which entered into force in 1999. Apart from that, the EU has signed bilateral Framework Cooperation Agreements with Mercosur members individually. After the 1999 cooperation agreement, both blocs re-launched negotiations for a free trade agreement in May 2010. After that, ten negotiation rounds took place without much progress and finally were paused in 2012.

On May 2016 (exactly six years later), with a new political context in Mercosur and EU, both blocs formally set forward their proposals for the first time. Based on this first set of offers, the two blocs held a negotiation round in October 2016. A second round took place Brasilia in October 2017 and was extended to January 2018, where both sides adjusted their offers and demands. The next—hopefully last—round will take place in Asunción this coming week.

If both sides reach a final agreement, the new partnership will become the most important bi-regional trade agreement in the world, with the inclusion of a broad range of issues that go beyond tariffs and rules of origin to include services, sustainable development and small- and medium-sized enterprises chapters

The next big step

But let’s not be too optimistic yet. If negotiations conclude in Asunción, then the main challenge will move to the parliaments of each country. The agreement will only be in effect when all the country parliaments ratify it, something that will only happen depending on how satisfied the countries remain with the resulting agreement. Moreover, Brazil is in the middle of a political crisis and election year; Paraguay will also hold elections this year. In sum, although this historical agreement is a gain for trade, the final decision will be shifted from the economic arena to the political one, something that seems to be even more complicated with these two regions today.