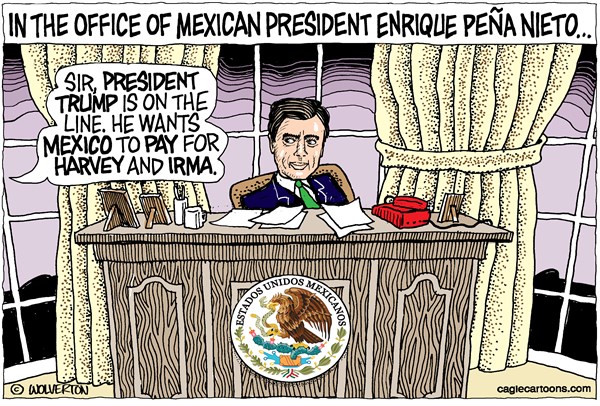 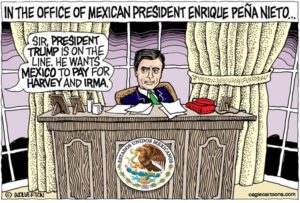 After Hurricane Harvey left its mark in Texas—and after Trump’s Sunday morning anti-Mexico tweets— Mexican Foreign Minister Luis Videgaray affirmed once again that Mexico would not pay for the wall. In exchange, Mexico offered to provide food, generators, water, medical staff and other aid in the aftermath of Harvey, “as good neighbors should always do in difficult times.” (Friendly reminder, Mexico was one of the first respondent countries back when Katrina hit New Orleans). Being the respectable and diplomatic President that Trump is, it wasn’t him who thanked Mexico for the offer, but Secretary of State Rex Tillerson.

And after Mexico was hit by hurricane Katia and an 8.2 magnitude earthquake, the strongest earthquake Mexico has seen in a century, Trump took an entire WEEK to offer his condolences to Peña Nieto. Trump’s lack of diplomacy shouldn’t be surprising, and yet, it is. His silence didn’t go unnoticed, Mexicans were frustrated he hadn’t expressed his concern for victims through a press release or on social media, especially after the country had just offered Texas aid after their natural disaster. (Though they rescinded their offer in order to help the 2.5 million people who need assistance back home.) To Trump’s defense, it wasn’t his fault for the delay, but Peña Nieto’s bad cell reception. Funny enough, with his “bad reception,” Peña Nieto was still able to tweet photos of himself visiting affected areas.