In a meeting that lasted over four hours, the OAS broke new ground Wednesday by finally convening a long-overdue discussion on the violation of the constitutional order in Venezuela. If the conclusion seemed disappointing—more dialogue—followed by the vote—it did, at least, put the government of Nicolas Maduro and the hapless group of organizations that had been supposedly mediating the breakdown in Venezuela on notice that, at last, a majority of countries are preparing to take specific action.

But less than 24 hours later, the Venezuelan government showed its real intent and disregard for international or regional convention.  In what amounted to a judicial coup—no doubt with the support of President Nicolas Maduro—the Supreme Court effectively shut down the democratically elected National Assembly and assumed its duties.  What a number of speakers at the March 28 OAS Permanent Council discussion had cited as a reason to invoke the OAS’s Inter-American Charter had come true: with the Supreme Court’s arbitrary assumption of legislative powers there had occurred a interruption in the constitutional process in Venezuela.

All of this leads to the question: what are those representatives who had questioned and even denounced the right of the OAS to convene even a discussion on the state of democracy in Venezuela going to say now?  After all, by even the most basic of the OAS’s democratic defense clauses—Resolution 1080—the OAS has the right to act now.

So, what now are the 14 or so countries going to say?

First a recap of Wednesday’s events. Thirty-four of the 35 OAS member states attended the meeting (Grenada was conspicuously absent—a case of the Petro-Caribe flu?) to vote on whether they should discuss Venezuela’s deteriorating democracy. For at least one hour, the usual suspects—Venezuela and its unconditional allies, Bolivia and Nicaragua—tried to boycott the meeting.  But they were overridden by OAS member states’  concerns regarding the treatment of political prisoners, the suspension of elections, and the flagrant disregard for the work of the (opposition-led) National Assembly in Venezuela.

Venezuelan Deputy Foreign Minister, Samuel Moncado, skillfully and repetitively, voiced Venezuela’s defense emphasizing the lack of legal foundations to invoke an OAS meeting against Venezuela.  Moncado’s emphatic argument that the discussion amounted to OAS meddling in the internal affairs of member states shifted between deliberate arguments that the OAS discussion was a coercive and deliberate abuse of the multilateral organization’s power to unrehearsed platitudes criticizing member states’s comments as threatening Venezuela’s right to “self determination.”

The two sides in the debate broke down in the following way. On the one side, Bolivia, Nicaragua and Haiti supported Moncado, toeing the Venezuelan line that this was an illegal violation of Venezuelan sovereignty and an example of OAS overreach. On the other, a coalition led by Mexico that included Peru, Costa Rica, Argentina, Canada, and the United States rallied around the need for Venezuela to return to the rule of law and democracy, calling on the Maduro government to free political prisoners and uphold the Venezuelan people’s right to free and fair elections.

In the end, there was little surprise in the vote count. Leaving aside the Petro-Caribe-flu-bedridden Grenada, the votes fell largely along the same lines as the vote last June when the Permanent Council voted to hear a report by Secretary General Luis Almagro on Venezuela. The only differences were that Saint Lucia moved from abstaining in June to voting yes in this discussion, Antigua and Barbuda switched from voting no in June to abstaining—a slight departure from their voting record, further splintering the Petro-Caribe coalition—and Suriname switched from voting yes to voting against this time around. Twenty member states were in favor (see chart below), chief among them: Argentina, Brazil, Canada, Chile, Colombia, Costa Rica, United States, Mexico, and Peru. Venezuela, Bolivia, Ecuador, El Salvador, Haiti, and Nicaragua voted against, as was expected by reports in the media and their unequivocal support of the Venezuelan government throughout the meeting.

After the discussion was approved, some member states took the floor to give their opinion on courses of action in the future. Some of the toughest statements came from Canada, Peru and Costa Rica, with the Canadian ambassador calling for a truth commission, an ad hoc governing body to guide the liberation of political prisoners and a possible roadmap to free elections in Venezuela. Costa Rica championed both the Venezuelan people’s responsibility to hold its government accountable, while also invoking the international community’s responsibility to oversee the democratic recovery in Venezuela. The Peruvian ambassador referred to what it called the evident alteration of the constitutional order in Venezuela, which would allow the OAS to implement sanctions under the Inter-American Democratic Charter. No one step was agreed upon, nor was a date set for a new discussion to further elaborate or agree on these possible actions.

At the meeting’s close, Moncado showed no restraint in pushing back, escalating his antagonism toward member states that voted in favor, his message firm and body language clearly showing his disregard for the proceedings, repeating his government’s view that the OAS was interfering in the internal affairs of the state. The issue of popular sovereignty was evidently the biggest elephant in the room, as Moncado willfully ignored the Venezuelan people’s interests over the state.

Then, 12 hours later the Venezuelan Supreme Court gave a collective judicial middle finger to both the democratically elected National Assembly and to the OAS and international norms.  Given their act, there can be no dispute that the basic definition of a coup—embodied in the 1989 Santiago Declaration—has occurred.

Is it time for another OAS meeting? If so, what will the other 14 countries now say?  We can’t expect much from the Venezuelan officials.  Having already shown how little they care about their own citizens facing a humanitarian crisis, why should they care about institutions? 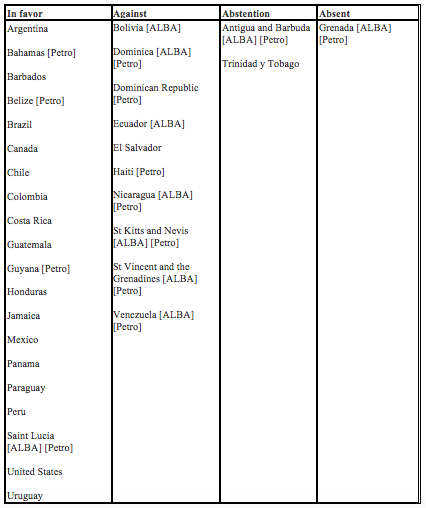