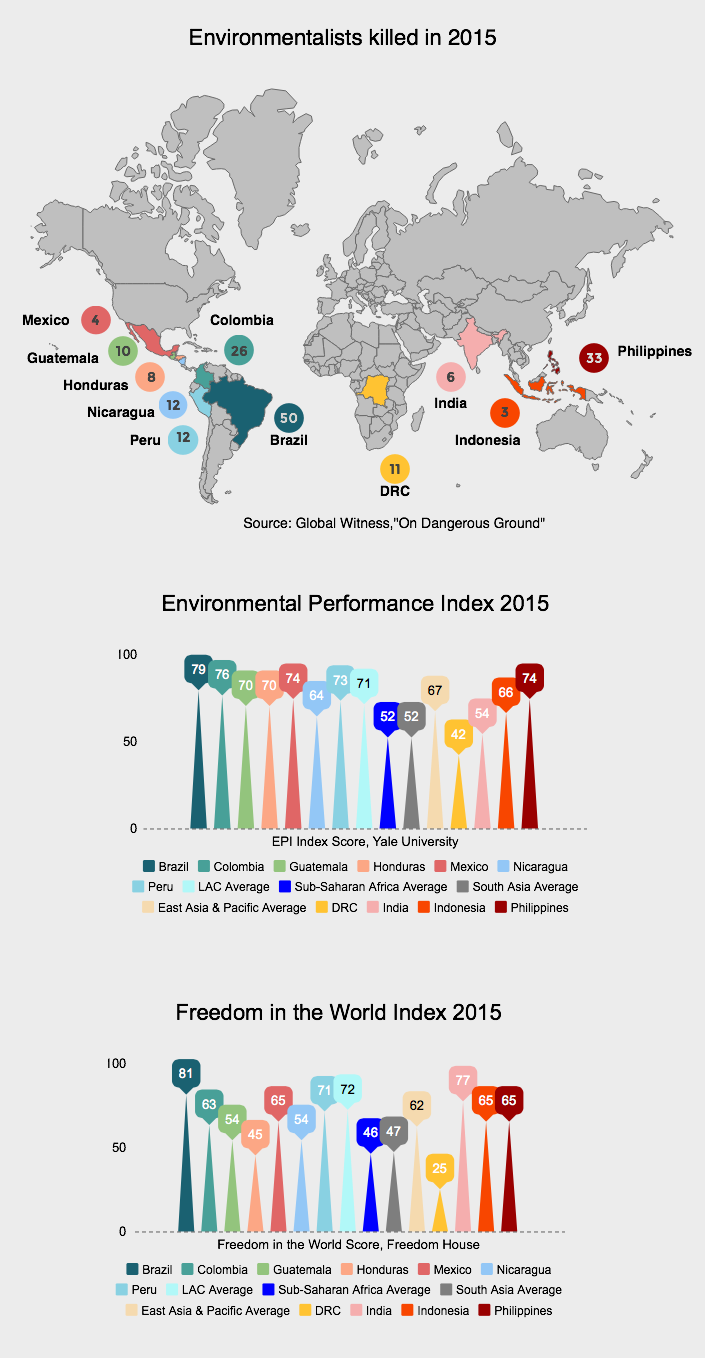 Berta Cáceres represents one of the best-known cases. She was murdered in March this year, after having received dozens of death threats over her fight against the Agua Zarca dam that had begun construction in a river valley considered sacred for the local Lenca community. Even her status as an internationally renowned environmentalist did not protect her. Nor did her own government, despite a request from the Inter-American Commission on Human Rights to the Honduran government to provide protection for her after she started receiving threats.

Last year was the deadliest year for environmental and land activists all over the world. According to a report by Global Witness, “On dangerous ground”, there were 185 killings of activists across 16 countries, which represents a 59 percent increase from 2014.  While this represents a global trend, Latin America has the worst record. Out of the ten deadliest countries, seven are from the Western Hemisphere. And, while these numbers are alarming, it’s also likely that these statistics do not include many killings that take place in remote or indigenous areas.

What makes the numbers—even if underreported—even more appalling is that in other measurements of democracy and human rights and environmental protection, Latin America leads much of the developing world.

In 2015, the five bloodiest countries were Brazil (50 deaths), the Philippines (33), Colombia (26), Peru (12) and Nicaragua (12). When we take population size into account, the country with the highest murder rate of citizens defending environmental and land rights was Nicaragua, followed by Honduras, Guatemala, Colombia, and Peru. The majority of those murdered (42) were protesting against mining projects. Agribusiness, hydroelectric dams and logging were the other main industries behind the violence.

The numbers don’t square with the region’s track record on human rights generally. According to Freedom House (FH) and their annual global report on political rights and civil liberties, the Americas is the second most free region after Europe. The score for Latin America and the Caribbean is 72 (out of a possible 100). Sadly, those human rights protections don’t appear to extend to environmental activists. According to the Global Witness report, an environmental activist has a significantly higher chance of dying if she works in Latin America.

Similarly, the region does comparatively well regarding environment protection. Yale University’s Environmental Performance Index (EPI), ranks countries’ performance on protection of human health and protection of ecosystems. In their 2016 report (which also scores countries on a scale up to 100) the average for Latin America is 73.

While the EPI only measures protection of the environment and environmental policy, for a region that does well in those areas you’d still expect a higher level of tolerance for activists. Not so.

Of course, the picture is not the same across the region. For instance, Brazil, the country with highest absolute number of murdered activists (50), but when considered per capita, is the seventh deadliest. In the meantime, it has much higher scores on freedom (its FH score is 81) and EPI (79) scores than Nicaragua (FH=54, EPI=64), Honduras (FH=45, EPI=70) or Guatemala (FH=54, EPI=70). The latter three countries are the deadliest per capita and, at the same time, have much lower scores in terms of freedom and environmental protection.

One reason for the disconnect between high scores civil rights/environmental policy and the high death toll of environmental activists may be that in the context of greater openness, the cases of murdered environmentalists are more likely to be reported. Killings in other countries may not be reported in the press. Or, in more complex situations with multiple conflicts, it is harder to attribute certain deaths to environmental activism.

The second explanation is related to the fact that almost half of those killed in Latin America were indigenous. Indigenous peoples have been, and continue to be, subject to exclusion: while they are around 8 percent of the total population in Latin America, they represent 14 percent of the poor and 17 percent of the extremely poor in the region. They are worse off than non-indigenous populations in terms of income, education level, nutrition, and health indicators. And while, in the past 20 years, there has been greater attention to and international recognition of indigenous peoples’ rights, there is still a wide gap between grandiloquent declarations and laws and real respect for the rights and lives of the indigenous.

A large part of indigenous communities’ new claims has been the access to and restitution of lands, and the implementation of free, prior and informed consultation and consent. It’s no coincidence that many of the murdered activists were protesting against large infrastructure and extractive projects, which were approved or implemented without consulting the affected local communities. And, while more Latin American states have ratified Convention 169 of the International Labor Organization (ILO) (which establishes the right to prior consultation) than any other region in the world, the Inter American Commission on Human Rights recently highlighted the many ways in which the right has not been respected or imperfectly applied. Similarly, a recent report by the World Bank affirms that 19 percent of the indigenous territories in Latin America are subject to legal or illegal mining— and the majority of that 19 percent are formally recognized indigenous lands. Not even titling or state recognition of community land rights seems to protect the indigenous communities from these activities.

Maybe across all these rankings of democracy/human rights and environmental protection we need to find a measure—or at least a voice—to explain how those metrics don’t capture the rights and struggles of a community that has suffered from marginalization, racism and lack of access to justice. Protecting the communities most tied to the land, the rights of the most marginalized and those who lead them, like Berta Cáceres, is a central link between human rights, environmental protection and overcoming a legacy of abuse and exclusion.