The past decade has seen numerous innovations in social policy that have gone beyond familiar approaches such as subsidies or non-monetary provisions (food stamps and the like). One such incentive-based innovation has come from Latin America, in the form of conditional cash transfers (CCTs) in which governments transfer cash grants to the poor upon meeting conditions that usually focus on education, child and maternal health.

Now India and other countries outside the region are looking to adopt them as well. But are these programs transferable?

The rapid spread of these programs—to every country in Latin America except Cuba and Venezuela—and their apparent success in reducing extreme poverty has strengthened the argument for targeted social programs. The CCTs in Brazil and Mexico have put themselves though empirical evaluations based on randomized control trials for two decades. In a 2009 World Bank Policy Report, Ariel Fiszbein and Norbert Schady note, “what really makes Mexico’s program iconic are the successive waves of data collected to evaluate its impact, the placement of those data in the public domain, and the resulting hundreds of papers and thousands of references that such dissemination has generated.”

Nevertheless, there have also been criticisms against CCTs. Some have argued that government resources would be better spent on broader development/social safety net programs. But even the critics agree that conceived and executed properly CCTs can bring about quick and positive results in reducing inequality and improving school enrollment, child and maternal health—even if they aren’t a panacea.

The Latin America’s experience with CCTs has been largely positive (questions remain about how targeted some of the programs are in Bolivia and Argentina and increasingly in Brazil). But for India, can CCTs work in a country of 1.2 billion people, where 363 million people live below the poverty line, 260 million of whom live in rural areas?

Answering those questions in a country of India’s scale raises a series of other questions: should these programs take a top-down approach or start with pilots in small municipalities, and then scale up? What conditions should be imposed on the beneficiaries, and how will these be enforced?

India has over 200 active social programs. The biggest is the National Rural Employment Guarantee Scheme (NREGS), which guarantees rural households 100 days of wage employment (for unskilled manual work) each year. Unlike Latin America’s CCTs, the NREGS places little or no conditions on participants. Some of India’s social programs are in the form of CCTs, but most of these are in the pilot stages. These pilot CCTs could potentially be integrated with existing social welfare programs. At present, the largest and most notable CCT program in India is the Janani Suraksha Yojana. The Indian government is also focusing on unconditional cash transfers, like the Direct Benefit Transfer (DBT), which seeks to cut out middlemen—such as subsidized markets—by transferring grants and subsidies directly to the poor.

One of the main obstacles confronting CCTs in India is the lack of access to its poor through a national identification database (though one such database, the Aadhar, is being compiled). While a number of studies have stressed the lack of financial inclusion as an impediment for CCTs, we should take note that India’s financial inclusion data is not very different from Latin America, which has successfully implemented CCTs (see chart below)—indicating that this should not serve as an obstacle. Indeed as a number of studies have shown CCTs have actually provided an incentive for the poor to become banked. 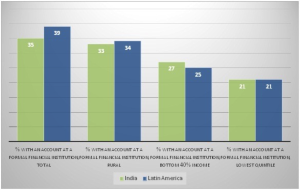 India needs swift, pragmatic, flexible solutions. After numerous allegations of corruption by intermediaries, who embezzle benefits that are meant to reach the poor, there is a growing consensus among the government and civil society to move to a more transparent system. The government’s decision to go ahead with the DBT must be seen in this context; it is a plea to reduce corruption by removing intermediaries and creating a more transparent system. Three broad solutions, or ideas, could help minimize the government’s obstacles and make the transition to DBTs or CCTs easier. First, states in India can customize their programs by having a mix of conditional as well as unconditional transfers. Dr. Sameer Sharma, a member of the Indian Administrative Service, suggests that “to minimise risk of spending disproportionately on things like liquor, conditional cash transfer has to complement direct transfers. Conditional transfers will take care of specific policy objectives, say, of poverty reduction, developing markets, removing social and economic discrimination.” Another solution is to leverage the availability of telephone connections, which exceeded 1 billion last month. The government can develop innovative mobile banking models in which money is transferred directly to mobile phones to beneficiaries lacking a bank account. India can learn from countries like Kenya and Tanzania, where the total value of transactions made in 2013 through mobile money constituted more than 50% of the countries’ total value of transactions. Last, while lack of sufficient public healthcare services is an impediment, private healthcare can play a positive role in increasing access to healthcare services in rural areas by integrating social assistance programs with private health facilities.

Instead of replicating the same models of CCTs used in Latin America, India must devise one suited to its own socio-economic environment. The Indian government may not be able to place similar conditions of regular health check-ups in rural areas where health facilities are scarce or at times don’t even exist, or of 80%-90% school attendance in rural government schools that are understaffed and underfunded. The experience of Mexico, which has since 2011 switched fully from cash to electronic transfers, has taught us that electronic transfers can be cost-effective, more transparent, quicker, and help increase financial inclusion. After all, CCTs are not a panacea for poverty alleviation, and the top priority for India will remain development issues related to infrastructure and connectivity, provision of public services, and the creation of more jobs.